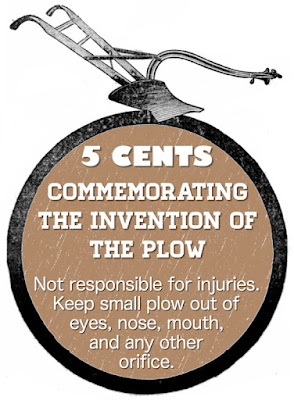 One of the more famous wooden nickels,
and rare because the plows are usually broken
or tainted with crusted ear wax 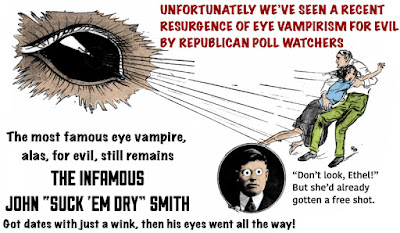 No history of Eye Vampirism is complete
without referring to one of the biggest villains,
John "Suck 'Em Dry" Smith

I had to help a friend in need the other night. A friend in need being a friend indeed, this friend of mine is a huge friend, always being in need. Be that as it may, as needy as you are, you're never too needy for me to swoop in and try to save the day. Or die trying.

But this isn’t about how great I am — I’m modest enough to say I’m only modestly great — but about a moment of sharing I had with a doctor.

It started with my friend calling, saying he needed someone to take him to the emergency room. He didn’t want to call the ambulance — and I took this as a huge compliment — because he’d read my blog post on emergency workers basically being in it for the free pastries. I told him I’d be right over, right after I finished the last three quarters of a cinnamon roll. Seriously, it had nuts like a boar, along with about a ton of cinnamon drizzle!

Anyway, I got there. He was hanging by a thread. And we got to the emergency room, where — wouldn’t you know it? — they let him linger on and on while they helped other folks, and walked by laughing with pastries of their own. So we sat in the room. I kept checking his pulse to make it seem like something was happening.

Finally, a guy presenting himself as a doctor showed up. He held the stethoscope up to the patient's chest and said, "Cough," murmuring over and over to his phone, “Yes, yes, yes, yes, no — scratch that, insert yes.”

Even though I wasn’t on my friend’s HIPAA list — the folks they can legally confide in about the patient’s prognosis, everything from their temperature to their pulse, Dr. Yes-No was forthcoming: “Just as I feared...” “What is it, doc?” I pleaded. "This doesn’t look good...” “What doesn’t look good?” I demanded. “I haven’t seen a case like this in ages.” By now my friend was also interested in his case, which seemed dark and dire. “Just as I feared,” the doctor repeated, “You’ve got Wooden Nickel Syndrome.” Of course my friend repeated the words back to him, being generally clueless about these conditions.

I answered for the doctor: “He means you’ve been taking too many wooden nickels,” which means different things determined on a case by case basis, like interpretive dance. The doctor looked at me as a fellow traveler. Our eyes met with an intensity I hadn’t experienced since the time I was heavily advocating Eye Vampirism in early 2002, a hobby horse I abandoned soon after because of a lack of fellow travelers. It’s damned lonely, a life as the only openly-confessing eye vampire in town.

“Exactly,” the doctor said, “Wooden nickels. And there’s nothing I can do.”

At that point — and I’m not a man given to professional confrontation as you might think — I protested violently, saying, “This, sir, is where I must disagree! There’s lots you can do for Wooden Nickel Syndrome—

“True,” he said, “but I haven’t lost a patient yet and I don’t want to start with him.”

Hearing such a lame excuse, and because I had Eye Vampirism fresh on the brain, I stood up and walked directly toward the doctor. He saw the intensity of my Bela Lugosiesque stare and backed all the way to the corner. I trailed him, staring, staring, staring. At last he buckled, and spoke in the grayest shade of monotone, “Yes, Master, I see and I shall obey.”

I stood aside and watched with pride as that man of medicine — thank God for doctors who can be reasoned with — walked calmly to my needy friend and shared valuable information with him, no doubt going well beyond the Physician’s Desk Reference in scope. It's true what they say, the hidden truths of life are the most interesting.

“If you take wooden nickels...” he said, staring into his eyes as he explained point by point the prognosis, its cause and its cure, the positive steps my friend could take to recover once and for all, and many other truths, well known and daringly arcane, “...in the end you’ll be fine.” I myself have studied the hidden lore of Wooden Nickel Syndrome over the years, of course, but even I didn’t know that its modern revival is attributed to carnival freaks in the late 1800s, originating as a kind of curse against folks who tried to pay them with wooden nickels. I thought it had to do with laughing at them, meaning, if the doctor's right, I can resume going to carnivals.

All the way home, my friend manifested the signs of a swift and sure recovery, seeming in every way his old self. Upon separating for the night, I restrained myself and did not — DID NOT — say, “Don’t take any wooden nickels.” Naturally that would’ve been very harmful. I did, however, use about five seconds of Eye Vampirism on him as we hugged goodbye, knowing I could calm him down without a word and ensure him a good night’s sleep.
Posted by dbkundalini at 1:39 PM