Black Helicopters & Jets Are On Me 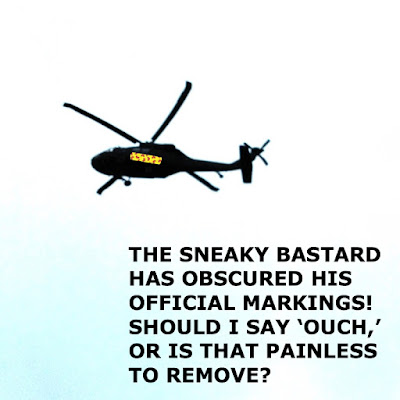 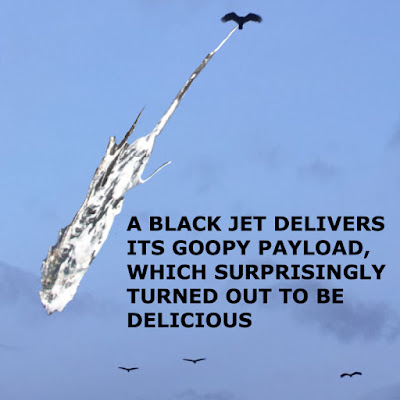 I’ve recently taken to camping, but now even that looks spoiled for me. If you’ve known me very long, you know I’m a very careful person. I don’t want anyone on my trail, know what I mean? My dad was the same way. When we had to fill out some papers on our family life in 6th grade, he warned me, "Do not fill it out!" if it asked, “Do your parents sleep in the same bed?”

At the time I was unable to see the concern. It wasn’t till I grew up that I realized the school’s basic function was not education, but fitting us as zombies in a totalitarian culture. If they knew who slept where, let’s say, they’d zero in on all our ways, knowing if we were a threat to The Man or The Woman or whoever ruled us now and in the future. Well, I lied and said I didn’t know where anyone in my family slept, including myself. The truth is, I literally slept under the bed, that’s how afraid I was, mostly of the Russians. Now of course they’re our overlords, but I dimly recall — although it’s hazy after the shock treatment and drugs — a time when we as a nation opposed them.

OK, a guy like me does enough “dimly recalling,” then jotting down the scraps of memories, and after a while I can piece together a narrative. And believe me, these bastards have gone beyond who sleeps where. Everything’s computerized now. They can scan your pockets when you walk by the turnstiles and see what you’re carrying, and find out everything about you. It makes a guy paranoid, except naturally for so many citizens who are already zombies. I keep the allowed change in my pockets just like they want, but I’ve hammered out a thin lead jockstrap that keeps my other business undetectable. As far as they can tell, I’m a neutered creature like the rest of the drone class.

How is it I’m able to go camping instead of working in the hives like others? Heh, heh, it pays to be disabled! You know the game toe I’ve got? That slips in and out of place when I need it to? That allowed me to get a special government disability check for the last 20 years? They determined I wasn’t fit to serve the realm. So I have some independence, although of course I still have to be careful. (Please don’t print a copy of this blog, thanks in advance. I have your phone or device set to self-destruct 20 seconds after you read it.) A little computer coating I learned. I know three different kinds of coating: 1) Lead coating on genital shields; 2) Goop coating on clams; and 3) Computer coating. You remember Acey-Deucy? My coat.

Anyway, OK, I’ve been camping. But my crazy paranoia is kicking in again. Mainly because I’ve been absolutely beset with a plethora — another word for coincidences up the yin-yang — of black jets and black helicopters buzzing me. As far as everyone else thinks, they’re just harmless passes, going from one place to another. So why are they always right above me? The scariest helicopter was a couple weeks ago.

I told myself it’s nothing. But its official markings were obliterated by a giant rubber-ducky bandage. Seems innocent enough. Then a voice comes through the speaker, “Enjoy Hell!” That had me worried. However, now — with lots of reflection — it’s hard to know if that’s a positive or negative. “Enjoyment” is typically a positive, “Hell” a negative; therefore, all things being equal, we might just as easily call it a wash.

Then a week ago today, a series of jets started coming over, apparently from the M class of planes, going by their shape. I would categorize them in the stealth group of planes, since they were entirely quiet except for an occasional chirp or beep. I outsmarted them by staying in my camper most of the time. The only downside to which — well, it was twofold — I ran out of groceries the second day — now I’ve got nothing but clams — and since I clean my portable toilet every other day, the bathroom is a complete mess. (I once knew a guy whose bathtub was up to the faucet with backed-up sewage. I console myself with the fact that my faucet is still mostly free and clear.)

One of the jets shot a fearsome bomb of some sort — the shape of it was like a comet, but the substance was more a goo or gel. I called out, mad as hell, “Hey! Hey! Hey!” What else could I say, but of course it was too late to do any good. I collected a wheelbarrow of the stuff, and a science major friend of mine examined it and said it closely resembled Glocoseoxytonicphosphate, which he chose to simply call Goop. Since then I’ve been using it as a sauce over baked clams.

Tell me when this ends! Don’t rat me out to The Man or The Woman! I don’t remember where my parents slept!
Posted by dbkundalini at 5:14 PM