No Mercy For Vermin 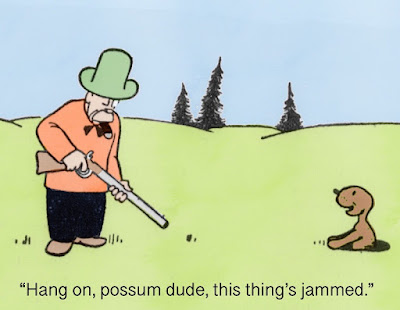 What ever happened to me? How did I develop this pathological sense of mercy for everything? I’m trying to trace it back. If it’s compassion, when did this travesty called compassion take its evil root?

For some reason I’m thinking of Willy Wonka, which I don’t know very well. But there’s a kid in that that bloats up similarly to the way I would’ve, except I don’t think he floats away. I know Moe bloats up and floats away, Three Stooges. He falls into some rubber mix, which quickly adheres and dries, then the others pump this suit of rubber slime full of air, and off he goes. You have to be lighter than air, or lighter than the amount of air they’ve pumped into your rubber suit. Good lesson to remember.

Back to vermin. I really am sympathetic — more than I need to be, anyway — to all creatures. But it doesn’t happen the same way every time for every creature. Compassion, it kicks in. Then I kill a fly instantly; they’re bugging me. I whack 'em dead. But in that case, my compassion is the quick killing. I’m not dismembering them slowly. Although I did have some fly paper strips, briefly, which ended up catching 10-12 flies. They didn’t appear to suffer, which was a true concern of mine.

Why? Why? O, why? I guess that’s the way bleeding hearts are wired. But now it’s gotten me in a jam; Grandma's house went to pot. Although, the full truth is more complicated. It’s not that I’m just so compassionate I can’t kill vermin en masse. But when it comes to vermin, there’s more to it than “kill or not kill.” There’s how it needs to be done, and not so much for their sake but for your house. You could kill vermin wholesale by burning your house down. Saves money on expensive treatments, return visits, etc. The huge downside, Bye Bye House.

So therein it is, the meat of the goody, problemo numero uno. A potentially complicated route to deal with vermin. You have to go to Vermin School, then they make you an Exterminator Extraordinaire, conferring on you various honors, titles, certifications, and finally a state license. You see a fly at 40 paces, you know its province, ways and mores, how it responds to the many elements of life, from sugar to rat poison. Really, how often have you see flies, for example, land on rat poison, and presumably eat their fill, and fly away, and not harmed in the slightest? Either they know when to say when, or there’s something in their constitution keeping them fit.

And it’s the same with rats. A rat could get tangled up in fly paper — I actually had it on my hand and it took three or four washing to knock it down to only moderately sticky — and not get away. But there’d be nothing lethal about the coating. Just being tangled up would be the worst of it. Then he gets back to the nest and rolls around in your house’s insulation, and keeps going like that for about three hours, and suddenly he's a furry possum.

I had possums coming in the yard and killing the chickens. Greedy little bastards thought they had the right to take food for their own sustenance, right under my nose! The way I handled those verminous (and ugly) possums was with a shotgun, or rifle, can’t remember which.

The honest way I should’ve handled the vermin, that have 99% destroyed Grandma’s house, is to pour money into better and different exterminators. Better, because with education the newer guys replace the old guys set in their ways. And different, because many minds have many possible solutions, not just the old tried and fail methods of Rex down the road with the same old poisons he was using in the ‘40s. These are cyborg vermin, not the happy-go-lucky vermin Rex knew and probably drank with after hours.

That’s probably it. The exterminator (Rex, in this case) saw the symbiotic relationship he had with vermin. They were his living, and if they died, he’d die too. So he knew the old ‘40s methods had long been surpassed by cyborg vermin, etc., etc., with the terrible ending that now Grandma’s house is shit and I’m out. The new guys won’t be calling Rex or his sons. No, they’ve got canisters on their backs, masks, hoods, and big guns like Electrolux vacuums. With the same motives as Rex, making it mysterious enough to keep their business secure. But they have such a larger field of business, because the old-timers screwed us up for decades.

Bottom line: Compassion is passé, kill everything in sight.
Posted by dbkundalini at 3:42 AM