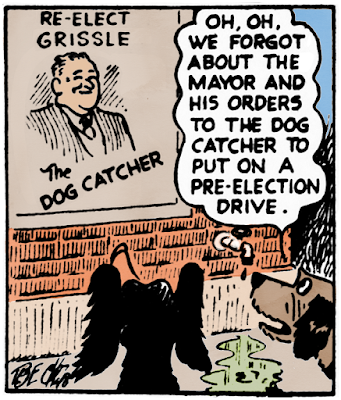 In these troubled times, with the Republican party the scum of the earth, it's hard to keep a civil society. Life is hard enough, as everyone knows, but these rabid fiends -- no friend of man or beast -- add to the general sense of misery. There's no easy solution, short of 40 million moonshots, which would take a lot of work. So we're stuck simply trying to get along.

Of course I personally never vote for Republicans, ever, with one lone exception, and that's Gus Grissle for Dog Catcher.

Gus is an old neighbor of mine, and, by god, I know he's more or less good with dogs. As I've heard at the coffee shop a million times, Gus keeps the loose feral population down within manageable limits. According to the Daily News, attacks by loose rabid dogs on children as well as adults are down to a respectable average of only 160 a year. A stat to be celebrated in a small town. I was personally attacked twice, but if you attend to it right away -- skip the hospital, there's cheaper antibiotics on the black market -- you'll usually recover sufficiently to limp along and recognize family members, although it’s often intermittent.

Naturally, the best remedy is prevention. An ounce of prevention definitely feels better than a ton of painful injections. And that's why we need Gus Grissle. He's our man! Because it's important to have a guy who's not afraid to get his butt out there, patrol, and bring these monsters in. As to the few healthy dogs that are loose, he's also the man to get them back to their families. Although I wish we didn't have to waste time and resources doing so much of that, because it's eradicating the attack dogs that has to be number one.
Obviously, we need a good man for dog catcher, a man sensitive to the needs of dogs as well as dog-owners/parents. As a dog parent myself, I want a dog catcher who won’t necessarily take my dog right to the pound, let alone shoot her without at least the courtesy of a phone call. Dogs are funny though. They don't know Gus is only helping them. My dog's been nabbed a few times, so now if I want her to behave, I just have to say, "I'm gonna call Gus Grissle, and he's gonna come get you," or just the word "Grissle." She growls, then goes to her crate and cowers. I coax her out with a doggy treat and we're back on good terms.

Gus knows a thing or two about dogs. But it’s not just his knowledge of dogs that makes him the best candidate. The best thing about Gus is that he actually wants to do it and does it. He's diligent. And think of it, it's a dirty job, thankless, most of the dogs you snag hate you, and you stand a good chance of getting bitten every single day. This isn't a cushy office job; these aren't office dogs, they're mean street dogs. The kind that talk back and take no crap.

This year, friends, I had to vote absentee for Gus Grissle. Because I’m presently in the Big City while they work on Grandma’s house. And the house is basically open, with protective tarps. A big concern is that anyone could get in if they wanted. Say a bunch of tramps were living there with their tramp dogs, it’s to my benefit to have Gus just up the street, looking out for me. And to send those tramp dogs packing.
-------------------------------
Older post: Gus Grissle for Dogcatcher, 2015 election
Posted by dbkundalini at 11:26 AM