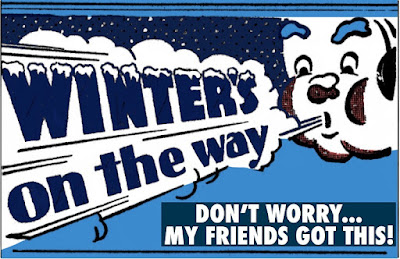 I used to have an old friend, Veronica, who would take (partial) credit for it being a sunny day. “See what my prayers did?” she'd say, pointing happily around. The weather wasn’t her only spiritual talent; she saw herself as key to a lot of positive aspects of life. I thought, maybe yes, probably no. But what can you say, “Hey, great job!” I always wondered how she could think that way, but it was OK.

My problem, if you'd call it a problem, is I’m more "realistic," but it's my own realism; her outlook to her was also realistic. I never gave her much credit, but I could be wrong; everything I think isn't a fact. Maybe she was right. Because there’s all kinds of scientific ways to demonstrate that the world isn’t what it seems to be. Just get a microscope and look. I wouldn't mind thinking how Veronica thought, if people around me could stand it.

We got the first snow of the season. Minor, so far, and it’s still coming down. And I had to remark, “See what my prayers didn't do,” since I didn’t want it to snow. But maybe Veronica, now passed on, wherever she is — heaven — thought I wanted or needed snow. It’s interesting she didn’t think that in August when it was so hot, but instead waited till November when it’s not so rare.

Still, even if there’s nothing to it, that seems like a good way to think, if you can manage it. It's hyper-optimistic. If I could just think that every little thing is happening just for me, that’d be a happy world. I wouldn’t have to tell everyone, of course, like going around taking credit for it. Say a family was in a 10-car pileup on the interstate because of the snow, I’d hate to have them show up at my door with legal claims. So I’d try not to take all the credit.

OK, let’s say I indeed have Veronica in heaven, still doing the same things she did in daily life, praying for sunny days and favors, then joyfully claiming the results as her own. I could let this blog be a plea to my other friends and loved ones who have passed to also pitch in. I could get up and think what I want, knowing they heard my thoughts. But if there is a one-to-one ratio on wanting and getting, I could just leave out the dead middleman and pray it myself.

What would be even better than passed-on advocates in heaven would be their actual presence along side me. Then every little thing I saw, I could credit one or another of them. I see a candle flicker, that’s Mom passing by. "Hi, Mom, how ya doin'?" Or I’m taking a bath and think, “No reason to waste water,” that has to be my Dad. I had a best friend who died around a year ago. I’d actually love him doing a few funny things in my life. Like giving me better blog ideas. In my opinion he was a genius.

Hmm, for some reason the sun just went down, sunk in a second! ... and it’s only 2:00 in the afternoon. It’s pitch dark and it was bright as noon five minutes ago. Never mind wondering what’s going on, excited scientists. It’s just Veronica telling me, I need more rest. Good night, one and all!
Posted by dbkundalini at 4:08 PM