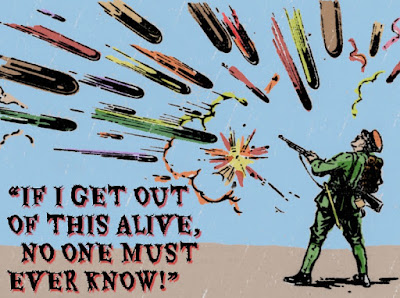 What we’ve always heard and experienced, guys come back from war and they don’t want to talk about it. You have an uncle, or three or four like me, and they’re tight as clams about the war.

Maybe that’s why I don’t say much about my lack of war experience. I will say this much, I could’ve gone to war. Uncle Sam judged me a prime 18-year-old specimen, good enough to be called at any second. But it didn't happen; I was glad. But after years had gone by, I actually wished I had gone. You get to retire after a measly 20 years. And of course the parades where everyone’s singing your praises, that's a great perk. I could’ve stood there in a crowd of people at one of these ceremonies, solemnly waving, then kept my lip zipped, because the warriors I've known rarely spoke.

As it is, we all have our experiences — happy, fun, sad, traumatic — and we don’t always talk about them. One, no one really wants to hear. I’m with people all the time, and you’d think the conversation would be, “Hey, you, you’re clammed up good and tight, not contributing even a peep to the conversation, stoved up tighter than a drum.” “Oh, I don’t know about that,” I might protest, hoping they don’t delve any deeper than they already have. You need to find a way to distract them, “Hey, look! is that an exploding Hindenburg?!” As everyone checks out the ball of fire, they’ve forgotten us warriors.

I still haven’t heard what the war was like. Which is another reason I should have gone. Then I could be the one sitting there inscrutable, savoring the terrible memories that must be the source of why I’m so clammed up. Any old war would do. The big one was WWII. I used to know some guys, and true to the whole thing, they clammed up. They were likely thinking, “This guy’s not saying a thing about the war because he knows I wouldn’t answer him anyway.” So we kept very quiet about it. Same reason we don't ask a brother about his honeymoon; there's surely details he wouldn't want me to know.

That’s the best way, just be cagey about it. And if you are unconsciously cagey, 100% resolved to the fact that warriors don’t speak, you never can tell, he might break down and spill his guts. Of course you can’t be too interested or he’s back to silence. I had a guy one time tell me about being on a ship going to Europe that was jam packed with guys, they were on top of tables, under tables, under chairs, maybe stacked on top of each other at times, such as when the ship made a sharp turn. The way I pictured it, it was wall to wall men, bumped, jostled, and crowded for a month (or whatever it took to make that terrible trip.) Hearing even that much was a rarity.

And I didn’t wheedle him for information, just let the details come in, giving me an appreciation for that aspect of his life. And I was glad I didn’t experience that fiasco myself. Two’s company, three’s a crowd. A whole ship full of guys packed in there, rolling over and crunching one another for a long time -- since I’m an introvert and part-time germaphobe -- would be a living hell. The biggest thing I never heard from that guy, or anyone else, was what the war was actually like, whether you killed anyone, etc.

A couple of my uncles were in Vietnam, early on and as an extended career thing. In planes, at least one of them in the refueling business. We always looked at their formal fuzzy color portraits on the wall and imagined what they might be up to. Then they’d be home, one at a time once in a blue moon, and we kept right on imagining what they might’ve been doing, because they certainly didn’t say. It was either too terrible to mention, or so innocent and benign it’d ruin the mystery.

I do some of that myself. There’s plenty I don’t talk about. Wherever I am, I just sit there in stony silence, offering nods to whatever (Are you OK?) and maintaining my man of mystery status. “Why don’t you say anything?” “Ain’t got nothing to say?” “Nothing?” “Nope, I mean, Yep.” “Yes, I have no nothing, I have no nothing to say.” Or plenty of nothing, however you choose to quantify a plenty that still comes out zero.
Posted by dbkundalini at 7:00 AM