The Big City -- Cats and Sirens 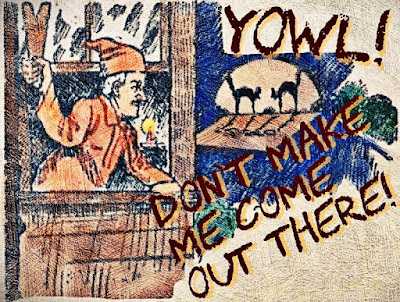 By now you know I'm living in the Big City. I was in a medium-sized town, and if they ever get my house fixed I'll go back. But the place became a nasty shambles, thanks to something, I don't know what all, unless it was simple neglect on my part. OK, I'll cop to a little bit of the blame, but the place wasn't that great ever. It was there before I was born, and who knows what all happened to it! I know a tree fell on it sometime in the '40s. So that's not a good start for me; they shouldn't have built it so close to where trees would grow.

Other than that damage, there's these little critters called vermin, that come in assorted sizes and descriptions, all of them bad. They range from microbes, the hardest things in the world to see, to out and out rats. You see one rat, you never want to see another. They're terrible -- believe me -- when they disappear under something and you don't know where they went. They're under there looking at you. Little red eyes. And to think I used to shoot them with bow and arrow at the city dump. That was fun. I didn't realize they were nasty as they wanna be.

Anyway, the town's trying to garnish my Social Security on some of the forced improvements on the house, even though I'm perfectly happy to let them do the work and bill it to taxpayers. I'm sure most of my readers can appreciate that. It's not that I'm irresponsible, it's just I have the good sense not to let responsibility go to my head. They can pay the bill and write it off, easy. Say they don't make improvements on the city park for a couple years. Right there you're looking at a couple thousand bucks.

So, the actual fact of the matter is, I got the hell out of there. I'm trusting you guys not to turn me in. And I went where no one can find me. I don't care if they search a thousand years. Notice I'm not saying which Big City I'm in. There's so many places to hide here, sometimes even I'm lost. But, and this is brilliant, I'm constantly going around in plain sight, and no one notices. You vanish in plain sight in a place this big! Ha ha, I laugh about it day and night, and just to rub it in, I finger in the general direction of my old town. Take that, you clueless morons!

There is one little problem. I want to hide whenever I hear a siren, but in the Big City there's so many sirens -- it's nearly a constant cacophony. Different from home, where the noon and 5:00 whistle's about it. In the Big City, I'm very tuned in to the sirens. They have the WAH WAH, WHOOP WHOOP, WEEEEE, and several others I'm trying to forget. The nearest thing we have to it back home are the howling cats. Remember, I said there's rats. Well, where there's rats, there's cats. Sitting on the fence, profiled in the moonlight, howling all night, signalling one another where the nearest rat was spotted.

I miss all that, compared to the constant sirens.

I picture these Barney Fife PO-lice learning their siren technique in training school. Itching to get out there and make their mark in the world. (Let's say they're library police, like where I am right now typing this. They'd love to get out there and hit the siren!) Anyway, the old PO-lice professor at the training center is a big man in their estimation. “You men — and I see we also have some women cadets in this modern age — have a grave responsibility to carry out. Not only to learn the siren, but to be the siren. The siren's message is our message to the community. You’re telling them there’s trouble, get the heck out of the way. And if you’re sleeping, wake up, look out the window, we’re about to come speeding by. We’ll never tell you what we're doing, or whether it was accomplished, but you can rest assured (in the minutes between now and the next siren) that it was something important. When you push that button, or twist that gadget, men, and you ladies, that’s your own wake up call to every neighborhood between here and the outskirts of the city -- 35 miles away -- telling one and all, 'I will get my man.'"

The whole crime-fighting business has that as its biggest goal, to make society safe enough, that — if the Almighty allows, and He hasn’t so far — we can get a night of sound sleep without the sirens howling, blaring, and otherwise announcing their noxious presence with predictable regularity. Could it be that day is in sight, perhaps just over the next hill, or yonder mountain and horizon, person, place, or thing? Maybe yes, maybe no. Certainly it won’t be today, so let the sirens blow!
Posted by dbkundalini at 1:44 PM