All This God's Dream 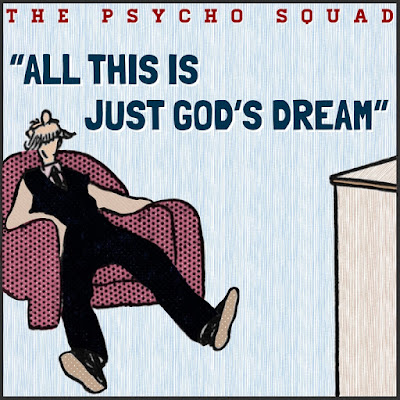 In my life as Psycho Squad head, maybe you know how it goes, keep your nose to the grindstone long enough -- being one of the few normal people able to do it -- and you’re Mr. Know-it-All. You’ve seen it all, done it all, you've drawn lessons that serve as patterns for dealing with future cases. Like being a doctor. The average doctor is bored, on an average day taking one of five or six courses of action — X-rays, MRI, colonoscopy, med changes, insulin, adult diapers, cough drops, etc. Anyone could be a doctor. It’s really too bad it's so regulated.

Be that as it may, I also met a very nice guy who blessed me in a church run. You know, a church run. I had this idea that I could get some good business posting on church bulletin boards: “Having a bad God trip? Call us, etc.” You'd be surprised at how many calls I got, but generally it’s not as dangerous as other runs since they’re already in the groove, well-grounded in habits of morality; basically they’re not carrying knives and guns. When I show up at a church, I'm 99% safe.

This goes back some years. One night they called and I arrived. Their study group had a guy cornered and wouldn't let him out because he seemed to be a danger to himself and others. Naturally, they have a strong sense of what’s true and what’s false, and maintain it regularly. But this guy — Jesus something — blew their minds with the theory that all existence right down to themselves and their group is merely God dreaming.

The Psycho Squad took him in, voluntarily — sedative darts were topped off in case of trouble — and he was sitting by my desk. He explained his thinking on the point that everything is God’s dream. I thought, That’s a new one. But it stayed with me. I've thought it over, counting my thoughts on both hands. Which were soon tied in knots and I had to shake them out. But, listen, scientists say the universe has been around 15 billion years since the Big Bang. Jesus' theory was that's equivalent to a single second in God's Dream. If everything takes place in that single second, God could wake up and have breakfast a trillion years from now! Or momentarily. What happens then? Maybe nothing, maybe instant death...

I guess it doesn't make much difference. We go on the same. Anything that happens, the good, we enjoy. Anything that’s bad, chalk it up to a bad catnap years ago. Ancient history, what’s there to worry about? So here’s the mystery: God sat in a chair, let's say, had a two minute snooze, and dreamt the vast period we’re still in. Two minutes. Then later that night, just guessing, God got a full night’s sleep. So future generations can look forward to a lot of craziness. And that's good for my bottom line. The Psycho Squad stays busy now, but then we'll go completely whack when we hit the full heart of darkness!

Bring it on. Tomorrow's always brighter than last night.
Posted by dbkundalini at 6:31 AM