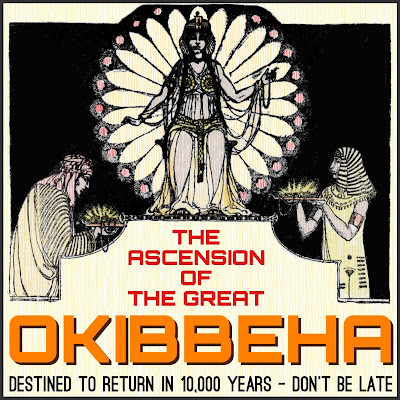 My problem with The Ascension of the Great Okkibeha, and any such incident, is always suspicion that it's some kind of ruse. Because, let’s face it, the magic’s gone from everything. The spiritual realms these days aren’t held in high esteem, not credible to our modern way of thinking; it's nearly always a fast-talking guy in a traveling carnival with a blue curtain and puff of smoke. It's true, every one of life's "miracles" -- from childbirth to four leaf clovers -- somehow involves that guy.

And anything that depends on faith is out. The knowledge we have today allows us only to believe mundane happenings, such as that horrible roar outside is a car without a muffler, not a farting unicorn. There actually is such a car in my neighborhood, and if my claim sounds the least bit untruthful I could personally launch a satellite into space and take a picture of it for you. So that’s one form of knowledge, easy to believe given enough satellites and cameras, but there are stranger things. As in the case of Okkibeha, because I’m saying she did ascend into some kind of spiritual realm. And that’s not just my claim, since I didn’t personally make it up, but the claim of ancient Egyptian priests who just happened to materialize before she departed...

Born Cindy Lou M——- to a farm couple in Iowa, family memories say she manifested an incredible interest in ancient Egypt as well as detailed knowledge. Most of us — myself included, usually smart enough to rattle off all kinds of trivia — couldn’t recite five minutes of Egyptian lore. I know there were lots of pharaohs and Egyptian citizens in the land of Egypt way back when. But telling one from another, get outta here! Similarly, I’m not that great with flowers, but I've seen people pick them and pin them to dresses.

Well, everything seemed to be coming to a head for Cindy, or the Great Okibbeha. She kissed her mother and father goodbye and called down an ancient staff of attendants from the sky, and ascended a makeshift throne. This was all in a barn, about the time The Psycho Squad got involved, having been notified. We took the call and buzzed out there, sirens full-blast. As we came over the hill, we saw what looked like a palace lighting the horizon. Which was the family barn. The light rose higher and higher, then when it reached a tremulous peak, a breaking point, all was suddenly black except for a much narrower beam of light piercing the clouds. As it turned out, Cindy/Okibbeha had said bye bye to this level of existence and taken off, robe, throne, and pretty backdrop all.

Did I believe this story? Not entirely, at first. We called out to her: “This is no joke, Cindy, come out! Olly olly oxen free! Yo, Cindy, Cindy Lou! Where'd you hide the barn? Don't be afraid, we’re with the Psycho Squad, an emergency help squad that helps those who need it, usually the wacky. We only want to make things better for you!" I sent Benny over to some smoldering bales of hay to jab his pitchfork a little deeper. "Cindy, your Mom says you’re behind on homework. Come out, we will stabilize you and find a tutor to boost your home ec scores. Making a pan of biscuits isn't that hard.” But none of it did any good. "Obstinate little bitch," I muttered.

I asked for her parents’ phones. The photos indeed showed various strangely-costumed men posing as Egyptian priests, but the place where Cindy had allegedly sat was nothing but a ball of light. So I didn’t know what to do. The Squad was there, so we gave the parents a few downers and shipped a couple of traumatized cows to the vet, and that was it.

Her mother then told us of the mysterious prophecy, that Okibbeha had been manifested again in the earth, born of a virgin, and is prophesied to return in 10,000 years, by which time most of us will be passed on. I don’t always believe such things. But the pitchforks didn’t hit anything and the heavenly beam of light, a million watts without electricity, had to mean something. It meant this much at least: I’m risking the Psycho Squad's credibility by believing it. Gotta put it outta my mind. And Cindy's gorgeous mother a virgin? That'd be the biggest miracle of all, hubba hubba!
Posted by dbkundalini at 6:49 AM