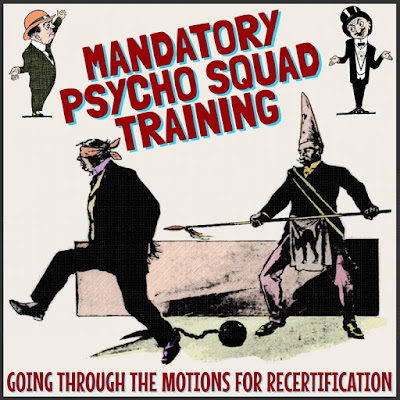 If you’ve ever had one of these jobs with real responsibility, where there's a bunch of higher authorities to answer to, you know the painful requirements of periodically demonstrating continued competence. It's all very official and extremely annoying. During those dark times of my life, I wish I’d settled for more generic grunt work, like mucking out horse stalls with a clothespin on my nose. No one shows up demanding you prove you can still handle a shovel.

For all the good things about the Psycho Squad business, there is, unfortunately — dammit to a christless hell — a lot of red tape, up the wazoo. What do you know, buddy, and how fast can you spit it out? What is your take-down protocol? Is kicking in the nuts still forbidden or finally state-sanctioned? What is our ultimate goal? What are the four R’s of Respect? They haven’t changed, folks! 1) Keep it REAL, 2) RESPOND to the situation, 3) aRREST every temptation to lash out, and 4) REPORT all problems with your own behavior and violations of the code. Probably the less said about 4 the better. But there's surely been at least one guy in recorded history who's reported ... whatever. We haven't met him that we know of.

Well, of course that's terrible stuff, but there's something even worse, which seems to be common with bureaucracy everywhere and officialdom in general, and that's the requirement to be certified, then recertified. This is a racket for somebody. Getting certified is of course a one time thing, but being recertified lasts forever. It looms out there regular as a heart attack on your 70th birthday. They're just waiting for you to have a bad day so they can take away your livelihood and allow an untrustworthy psychotic population (and I’m lumping in those who haven’t yet run amok) to live free and do their worst.

One of my early recerts was with a guy who knew the drill, and he let us skate by, giving us the answers to fill in, and he kept it very cursory as to the tests. I’ve written about the first time I got a driver’s license at 16 and how lucky I was. The stern, strict guy who was a terror to all just happened to be on vacation that day. I didn’t know it and showed up and took the easiest driver’s test in history. That’s the way I want recertification to be. Don’t make it a memory test. Everyone knows every actual case is possibly uncharted territory. You sink or swim by your wits, not by memorizing the 4 R’s.

That's not to say we don’t do it. Sure, we do it. We're willing to go through the motions and even doll it up to look more arcane and mysterious than it really is! “This time you be the perp and I’ll be the guy with the black cat loincloth and spear. I'll blindfold you and chain this 100 pound weight to your foot, representing your limited mentality, then chase you to hell and back before taking you down, metaphorically speaking, maintaining respect for your boundaries, essential humanity, etc."

Look, folks, I always pass. It's not like I'm not qualified. And with my declining memory from getting older, I sometimes do think of the 4 R's. But I also think of the 3 L's of taking a leak, 1) Look down, 2) Linger, 3) Let go. Any trick in the book if that's what it takes.
Posted by dbkundalini at 6:35 AM