They Blew Up Outer Space 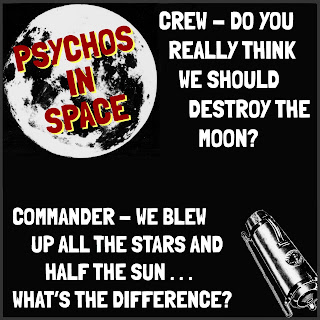 At this point it’s only science fiction. And if I and the Psycho Squad have anything to say about it, that’s the way it’ll stay. They don't call me Kibosh for nothing. But, friends, even I might need your help. There have been few other catastrophes affect me this deeply, the terrible feeling that all things could be wiped out in my lifetime. I used to play at the city dump, bashing in the screens of old TVs and shooting rats with a bow and arrow. The town shut the whole thing down and told us to get the hell out. This is like that, traumatic.

So here it is, this dreaded limbo of threats and negotiations with every eye on space. Just thank your lucky stars nothing's happened yet. And I hope to hang an alien that’s how it stays. But the threat is real, and actually has every indication of not being aliens but our own species. It's ridiculous, Earthlings that far off the beam?! Haven’t they learned at some point in their pathetic lives “Live and let live”? Anyone that far off the beam, where are their values?

Certainly we must not put anything past them. One, a destructive urge like that is pathological. With my training, I should know; I aced the Destructive Urges test, not because I’m destructive — I’m not — I’m so anti-destructive I could spit. Complete destruction is never called for, with perhaps the sole exception of destroying anyone who would dare attempt it. Only then are destructive urges warranted. Because there can be no tolerance. We must declare it the highest priority and seal the deal for our existence, the planets, the stars, etc., with no mercy for those who'd threaten the system, our system, solar, stellar, or whatever.

Just thinking of someone like that, so far gone... I'll expound on it. What a craven urge! These are psychos that should not be helped, only destroyed. And no one will hold me back! Unless — and this is theoretical — they could be somehow captured and brought to justice, the sternest judgment, perhaps the death penalty or dealt with therapeutically. But let's say the situation is literally as portrayed above, where they’ve already destroyed the stars and half the sun. They themselves would need to be blown out of space. We would have to act preemptively, long before they unleashed more chaos than we could sweep up.

The Psycho Squad will never advocate for anyone that far gone. Maybe, yes, theoretically we’re sworn to help. But that far gone? No! That's beyond the pale, no hope. Just write them off. If they'd cause that much misery, that much destruction, they’re gone, history, out of here. I don’t shock easily — I like easy days, and fatalities per se don't bother me — but this level of wickedness, these depths of depravity sap the last of my tolerance. It's gone in a heartbeat.

First, though, and I hope this puts things in a more optimistic light, there seems to be some bluster at hand. We don't know how many stars there are precisely, but it's in the billions. And they’re pretty far scattered. No one could destroy all the stars except Nature itself if they all just collapsed on each other. And whether it’d be possible to destroy half the sun, I also don't know that for sure. It sounds far fetched. It'd have to be a perfect hit to destroy half, a payload right down the shute, boom! Instant half of a black hole.

So there's some hope. But any psychos that attempt such a thing — whether humans in space or some other scurrilous alien breed — need to be dispatched. The local chapter of the Psycho Squad, for which I speak authoritatively, decries all such threats, plans, and deeds. We offer only censure and condemnation to the perpetrators.
Posted by dbkundalini at 6:33 AM