I Am A Proud Cog 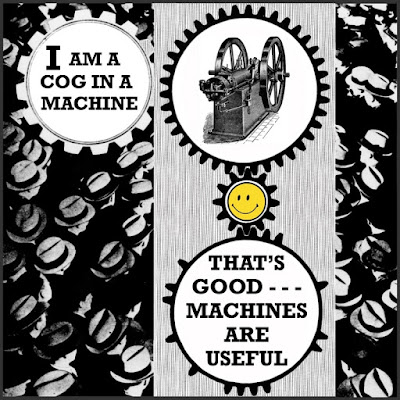 Have you ever foolishly worried that you're "merely" a cog in a machine? Or are you rightfully proud that as an appropriate match to other cogs the machine runs smoothly? When your long life is finished, will they put your citizen name on the tombstone (boring!) or a nice glorious stylized clip art cog to identify your valued life?

I used to think I was something other than a cog, because really I hadn't given much thought to it. I was 18 and in my first job, but having raging hormones I wanted to go see my matching girl person for a date. But the boss instead wanted me to work overtime. So he came in and shared with me the facts of life. These facts didn’t involve wasting time worrying about sex, but instead me being a cog in a well-oiled machine. I learned that if a cog doesn’t stay put and do its job, it's replaced. Naturally I took that as a new insight, and since I always want to be helpful, I stayed. Even now I can imagine that wise man in his office -- he's long since passed on to the great machine in the sky -- and I still feel privileged that from his lips I learned that great lesson.

Life would be a lot easier if we could cast off all flesh and blood and literally be metal cogs and strong machines, joyfully going at it, no evil hormones to interrupt us. We would pause and submit to on-site mechanics, not waste time going to the doctor. It would be of the greatest value to work 24 hours a day. And our arms would be programmed to reach for the exact medicine we need. I don't always know what to take. The only medical knowledge I have are bandages. Which are tough to choke down, but if you can manage it they're great for a sore throat. If they could only be engineered to cure everything, from headaches to broken bones...

But as things stand, we still need a doctor for everything else. Jock itch, syphilis, Italian breath. The doctor actually helped me with Italian breath. Put hot sauce on a bandage and wrap it around your tongue and replace it every couple months. And avoid Italian food. And I guess there's other medicines we’ve managed to wrestle out of the doctor’s hold: cough drops, triple antibiotic, and fungus spray. Everything else is off limits. With the Psycho Squad, I can't even commit a guy to the psych hospital and throw away the key without a doctor's OK. It tempts me sometimes to blow my top, but I tell myself that there is social wisdom in it. A higher-up cog decided, so that's good enough for me.

Just to come full circle on my triple antibiotic story, I tried healing an itch on my arm with triple antibiotic, with a consult with the doctor. After a few days I thought it was cured so I quit applying it. But it came roaring back. So I ganged up on it, applying the cream several times a day for a couple weeks, till -- yucky! -- my skin was glowing and sagging. Ultimately it worked and that's good. Wrestling psychos into ambulances is a lot easier with two arms.

Just to close it out on my old boss. The last time I saw him was in 1984 at a political debate of the presidential candidates. Beloved Mr. Cog in the flesh! But I didn’t go over and visit with him because I still didn't quite feel worthy. I still had in my mind the original shame of wanting to visit a girl instead of working. This was before I had the Psycho Squad franchise or I certainly would've shared with him my place in the world. And maybe checked his mental health to keep him going. Good health is important, from one cog to another. Do your part and you will fulfill your destiny!

Please, seriously, do your part faithfully. Reading time is now over. Back to work.
Posted by dbkundalini at 6:35 AM