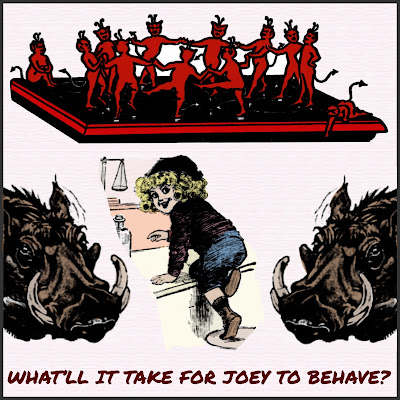 Raising well-behaved adorable kids is one of the hardest things you can do. Especially these days when every kid tries to consciously out-psycho the next. I’m glad I haven’t got legitimate prospects if for no other reason than that. It’s a thankless task; were I in the market I’d take myself out and join a monastery. Or convent, depending how I swung. Still, the temptation is a bad habit to break, although lots easier with age.

So, fortunately, it’s a one-sided love affair for me these days when it comes to mating. Because everyone's understandably scared by an old man approaching the age of death. Which helps save my underlying vigor; I’m not at loose ends, not wasting my substance, but using it for the inner vigor, killing people with kindness and the force of ideas, not just looks. Any residual frustration I have, I invest it into corralling psychos and getting them help. I get a lot of laughs with some of the nurses, handling my cases with exaggerated kids' gloves. Like bloody murder just waiting to happen.

But, really, the best advice you can give another guy is, "Look before you leap, brother." And spell it out as clearly as you can without being a bore. Because sometime before that point you've already said too much. You have to just release them and know they'll misbehave, they must learn. These days are a lot looser, of course, which clearly makes things worse for them. Because at some level love partners actually want romance and restraint, not your bare-ass business dangling and bobbing and straining in their face.

I won’t bore you with the language of romance. But if you don't get it, you're doomed to a life of skags, runny-nose cross-eyed kids, fights, divorce, estrangement, a bad reputation, and of course a persistent itch. You'll be tossing in bed, trying to sleep, but knowing you're not the only life-form in your body, and that's a huge mental weight. Itch leads to inflammation, which leads to burning, which leads to various back alley doctors, which leads to payday loans, stolen cars, and sleeping in a dumpster. With one eye open and a gun. Friends, before any of that happens, grow up, find a sweet girl and give her candy, meet the parents, take an interest in civic affairs, and be responsible.

I don’t envy anyone these days, kids or parents. Sometimes the parents are only about half grown up themselves. And the kids aren’t thought charming unless they’re in juvenile hall. There’s a whole different vibe these days, behavior up the wazoo, out the you know what (ass). Not happy unless they're underfoot, smarting off, flipping off their betters, opposed to morality, slandering the spirits above, spouting lies, burning flags, doing drugs in church, taking knees at football games, sleeping around, having kids out of wedlock younger than themselves, and putting up absolutely no fight in the fierce war against good values and basic primate sense.

What would I do with kids and their terrible behavior these days? First, arrest the parents. And once the bad influence was subdued, they’d have a better chance in an orphanage of growing up normal. That is to say, as far as doing the right thing, I’m not sure they really stand a chance. It can be tough to get in an orphanage. But get them there! Surround them with devils to tempt them but enormous warthogs to hold them back! And when they turn 18, they're a better person!

Moms and dads, love your kids, if it’s not too inconvenient. Or I will be over with the Psycho Squad, billing you for an expensive ambulance ride, more money for me and a lot more grief for you.
Posted by dbkundalini at 6:50 AM