A Bull of Attainder 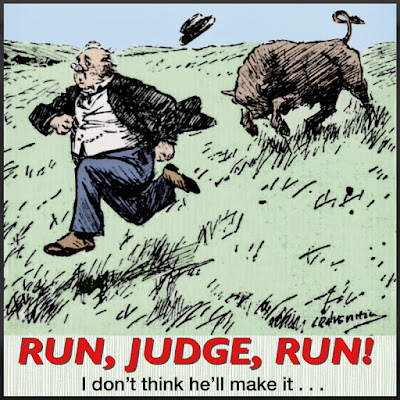 The first case I know of a guy being chased downhill by a bull was with a guy we called Judge. Judge was a judge, which you can probably tell by his stupid dumpy look. And, speaking of bulls, he might pass on a bull of attainder — sounds highly technical — which was a summons from the judge one step up, as much as saying, “I’m the judge one step up and you will do as I say, and if you don’t, we’ll get the judge one step up from me and he'll make you.” It’s like kids double-dog daring, triple-dog daring, and if that doesn’t work, just going full bull, at which point the opponent is gored and leaks when he's out swimming, blood out, stagnant water infecting the wound in.

Essentially this is the stuff they teach you the first day of law school, right after clearing up the point about No. 2 pencils being preferred to other numbers. The computer needs it that way when it reads your essays and reports. It’s been a while since I applied for law school and was rejected because of outstanding parking fines. Memo to any kids out there, make sure you’re up to date on licensing your cars, dogs, and if you’re married to a beautician, her certification. Or they’ll issue a bull of attainder and you’ll be working that punch press at the factory for life. Until you lose a hand and your reason for living.

Anyway, back then the Judge naturally had to hand-deliver the various bulls he was in charge of. And that meant going there fully looking the part, keeping his Judge costume on everywhere he went. He'd be at your door, your barn, your garage, the other out-buildings, the fishing hole if you were down there. And up and down every field between there and the county line if that’s what it took! These rural areas, don’t look on your phone to find your way around; you're either born there or you're lost. If you were born there there’s no mystery at all — or if you’ve been out there hunting over the years. Then you just look at the back of your hand and you're there.

So there goes the Judge, proud of his get-up and the respect he instantly commands by his great role in society. He inspires fear, trepidation, and envy. Personally I wouldn’t want a son or daughter who was a judge. It's like this, I’m such an egalitarian guy I wouldn’t want any favors from my kin, because others would then be jealous and hold a grudge. But with my perpetual good cheer, they’d still think I was getting favors and hold it against me. They’d be right in my face, barking, “Why don’t you ever get any bulls of attainder?” And the true answer would be, “I take care of my affairs as I go, so I’m never in arrears.” They’d be nodding their head, their eyes rolled back and their mouth indicating they still think I’m getting favors from my kid.

And when you call a man a liar in those areas of the country, that’s as good as wishing for your own death sentence. I might issue a bull of my own, a bull to chase you downhill, kind of like the one that got free and chased the Judge downhill. Something Judge never did much of was exercise. So it was his own fault that the bull easily caught up with him and … That was a bull of attainder, easily attaining enough speed to gore the Judge straight through. A fitting sentence.
Posted by dbkundalini at 6:00 AM