The Day Death Shows Up 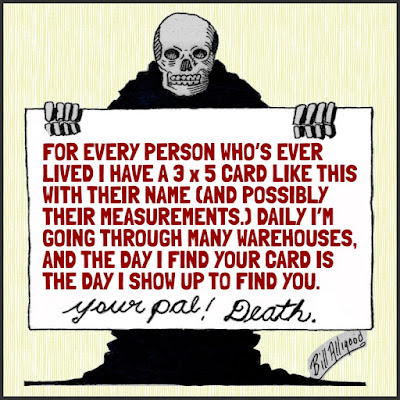 Here’s one I like. Talk about throwback bookkeeping! Instead of the great mystery everyone thinks Death is, high tech, cutting edge, we see it's quite simple. Anyone can understand it. Which may be one of the reasons no one has much trouble dying. Whether you're young, old, a genius or dunce, you're sitting watching TV and sudden guttural noises and struggles tells you something's wrong. What happening? We may never know the whole story until we ourselves experience ... clutching the neck ... and we're gone.

But we see here that Death's mission sounds very straightforward, crystal clear, and without ambiguity. He spells it out, an open-ended mission to seek out all lives in all civilizations and bring them to an ignominious conclusion through his own ministrations. Whoever it is. The millionaire financier who owns Texas oil wells and is up all night smoking with the president isn’t any better than you or me. All of us -- each mortal soul, including my dog, sad to say -- is catalogued somewhere in Death’s filing system.

One of the ways I picture this working is ... the 3 x 5 cards aren’t just the nice white kind we used to have for school, but some kind of really cheap paper that browns quickly over time. And since older people usually die first, Death can just flip through the browner cards. While of course shuffling in an unknown number of newer cards to keep us guessing so no one gets too comfortable.

The message he holds up says there's a card “for every person who's ever lived.”  Some of those cards have to be so brown, so yellow-brown and brittle as to be falling apart. Probably they've been digitally recorded and the hard copies dispensed with. I'd like to see the notations on Jesus' card: "Dead" on Good Friday, "Never mind" on Easter. And the same thing year after year, until "Forget it and have an egg..."

One interesting detail is Death doesn’t restrict the information to just your name but also “possibly” includes your measurements. I’ll probably get in trouble with someone if I “flesh” that out too much, but I think most of us have a mind to “go there.” Let’s jump on Death for this one, you old devil you! Can he really be carnal enough to care about bust size, well-spaced hips, or for the rest of us, our endowment or lack thereof? That’s the only thing I can think of. It might be good news for me, the reason I'll keep to myself. Never hurts to fly under the radar.

But maybe this tells us more about Death than we should know; he might even have some envy going on. So often he's portrayed in artwork with a skeleton head and skeleton hands and skeleton feet. What’s the chances, realistically speaking, that the rest of him has much length or girth? A point I'm afraid to flesh out. I hate to say he’s lacking in any one department, but there's few other realistic conclusions we can reach. Notice we aren't allowed a peek under the robe. So what’s he got down there? He’ll kill me for this, I know, but ... I've never heard of a Mrs. And I've never heard of any little Deaths running around.