From Symmetry To Cemetery 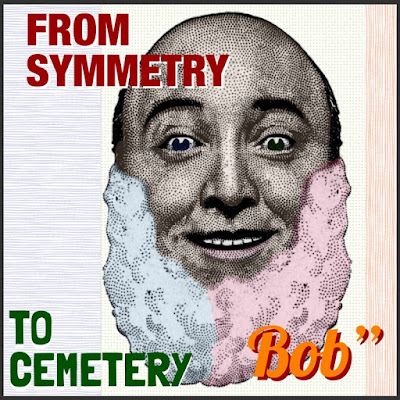 I know it’s hard to say any one person deserves to die more than another — barring hideous capital offenses, crimes against humanity, and unrepented pigheadedness. But could we at least make an exception for the overly-fastidious and those with strange quirks? This is something I could head up, although my deep seated tenderness will eventually be the death of me. I can only resist it for a while, because nothing hits me like a sob story.

But of course there’s sob stories and SOB stories. Bob would be in the last category, a real SOB. Mostly because he's annoying, with a very pronounced longing, even demand for symmetry. Have you ever had the symmetry bug? An overabundance of balance? If there's a shrub on the left side of your house there has to be one on the right? That kind of thing.

There’s nothing more predictable than symmetry, which is why every freethinker's first impulse is to mess it up. Symmetry sufferers have too much thought for harmonious arrangement. To the point of even their shaving cream, wanting it to stretch nicely from ear to ear. If there's something neat about it's upper border, it needs an equal lower border. And maybe a dab on top of the head and one under the chin.

Do I personally have trouble with symmetry? I believe so or it wouldn’t upset me so much thinking of Bob. But I try to foresee it and work fastidiously to make things less harmonious. Take this blog post up until now. It started with a general beginning, introduced a particular case, and now I’m in the process of giving and taking, my own problems with symmetry. Even now I can see what it'd need for good symmetry to the end. Which, if Bob were writing it, would flow as predictably as sexual waste in a prison shower. But I’m going to purposely mess it up with something unrelated.

By the way, have you ever seen a prison shower in real life? I’ve never been “in” prison but I toured one. Our hands were marked with invisible ink visible under a black light. I had such fear that day. I even pictured a guy jumping me, cutting off my arm, stuffing it into his sleeve and going through the black light. With me bleeding to death in his cell and the rest of the tour group going on without me. Anyway, I saw their shower, just a big room, shower heads all around, a big old public shower for men. Thinking of it over 30 years later, I still get nightmares.

See, my prison story ruins the symmetry. Meaning, I'd get kicked out of Bob’s Club, him and his fluorescent shaving cream! I'm not sure how they shave in prison. They don’t want anyone cutting their throat and getting out early. Hey, do you think maybe Bob had a record? Maybe Bob “served time”? I hadn’t thought of that! I just thought he was a neat freak, but maybe he was sending prisoners a message...

Right there's a good enough reason for him pass on. With him dead we can sleep better, knowing he’s not going to be shaving his symmetrical arrangement and “accidentally” slipping and cutting our throat.
Posted by dbkundalini at 6:00 AM