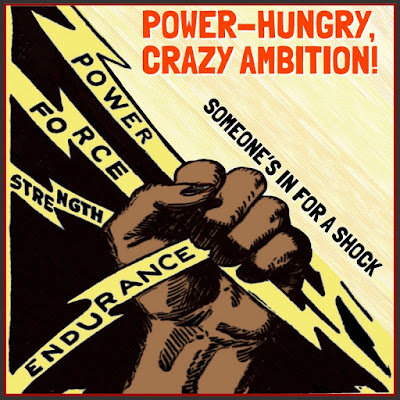 I'm sort of a fan of big ambition. But I admire it from afar, since my own ambition -- while it exists in seed-form doesn't always sprout. Because I'm picky; anything I do, I want to be the first. Anything else and It's been done to death. If I can't come up with a fresh take on a thing, why bother? No one likes an imitator. Go big or go home, or just stay home. Maybe eat a big meal, wait a few hours, then go big.

So without big follow-through I'm a guy with just a little drive. I'm no Dr. Frankenstein, for example, who wanted to bring people back from the dead or piece together one guy out of multiple bodies. But his problem was like the guy in the graphic -- the danger of messing around with lightning. Thinking, "No pain, no gain," then proceeding, "If that's how it's done, that's how it's done. Gotta do what you gotta do. Let's get it in one take. If I'm gonna get knocked on my ass, I only wanna do it once..."

In Frankenstein, his book and movie, lightning reanimates a corpse and they basically live happily ever after. Yes, they had a few problems. A little girl was unfortunately frightened, but nothing terrible, about the same as if she turned over a rock and saw a spider.

But in the graphic, it's a different guy -- we're calling him Samson -- with big ambition, who undergoes the pain involved in achieving it. Because grabbing lightning is dangerous; it either kills or heals you. With a big payoff in Power, Force, Strength, and Endurance if you beat the odds.

It would be fascinating to watch Samson do it. With me standing far back in safety. He's got a huge ego, he's too big for his britches and not afraid to show it. He's stomping 'round the ring like a professional wrestler. He's cursing all heavenly powers, lightning bolts are going off everywhere. His grandma rolls up in a motorized wheelchair and shakes her cane at him, telling him to stop. A bolt of lightning strikes his head and he channels it out his arm toward her, blowing her across the arena. It's a mess, but there's no stopping him. Unfettered ambition!

He reaches his hand up and knows this terrible enterprise is the same as stealing fire. He has a grasp on several bolts. But he needs as large a dose as he can get, so he's got the bolts and he's wringing them dry, with prodigious quantities of Power, Force, Strength, and Endurance spilling everywhere. Someone brings in a huge funnel and bucket. But there's no telling what happens if it's all carelessly combined.

What should he do? You mess up, there's no Take 2. Grandma lies dead on the floor, he sees no use in stopping short of complete ambition and fulfillment. "Bring it down!" he commands, with the heavens responding in an enormous eruption. He gets the sense he can do all things. This is uncharted territory. But what happens is, If you have that much force flowing through you -- and all of it being carelessly combined, no isolation -- you are literally blown to smithereens and immediately declared dead, even in the absence of recognizable pieces of a human body.

So Samson's death is a death we can all celebrate. Anyone that bad ass who succeeded would've raised the bar way too high for the rest of us. We don't want a guy like him around. We want to get dates, too. Had he succeeded, he would've been proverbial, and every time anyone said, "Go for it," and you were afraid, they'd compare you in a negative way to him. Now as it is, he's the failure, and those who avoid such stupid ambition are seen as having enough sense to come in out of the rain.

Good riddance, Samson, and the same goes for your idiot grandma! Thought you were better than us, huh?
Posted by dbkundalini at 6:00 AM