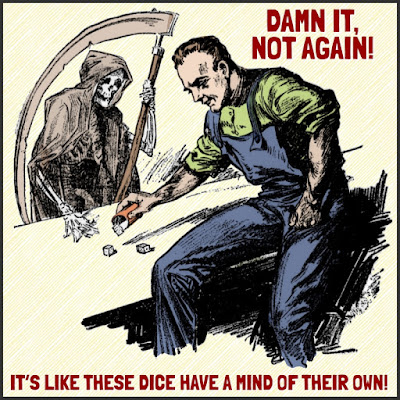 It's ridiculous. How anyone thinks they can play dice with Death and come out even. It's beyond me. Of course I respect Death and always avoid getting on his bad side, so believe me, some of this stuff you too can avoid. At least try! Don't just sit down for "a friendly game" or start wagering or you’ve already lost. Does Death come right out and tell you what you're in for? No, there's no full disclosure rules. To him it's sport and he gets his kicks at your expense. But I'll give you the only advice I know that does some good. That's resistance. Death usually moves on to someone else.

Most days I feel fairly free. I don't feel any huge compulsion in any regard. I'm consciously engaged, thinking on my own, sequentially thinking without troubles. But those who are dying, it's exactly like Death has them cornered, then they try to resist when it's too late. It's good to check yourself. What I do when thinking is I string a few random thoughts together and feel myself go on auto pilot, allowing myself a conscious/unconscious flurry of thoughts that leads nowhere in particular. I sense in that that my thinking is my own. But you can't settle on it, with your mind close to blank. You have to move back to ordinary thinking so you're not hijacked.

And that's it. Don't roll dice with Death, don't play games. Just walk away. Don’t play the game. Another bit of advice: Keep your calendar in a private place, especially if you have upcoming doctor appointments. Act healthy. Leave games for others, focusing on living a good life. I actually feel pretty well, so right now for me nothing's a threat. I'm not likely to have a heart attack right away. So things are pretty good.

Anyway, back to playing dice. I personally don't even know the rules for dice. It’s nothing I’ve ever played. I’ve rolled dice, like everyone. But just for games like Monopoly. Or to show myself, maybe, the way numbers work. There’s no particular sequence. Every number comes up at random as they turn in the air, roll across the table, and land. It's boring, not a "game" interesting enough to play.

But the guy in the bib overalls, Chester, has a sharp focus on the game at hand. He follows whatever the rules are, puts the dice in the can and shakes them to get a particularly good shake and then throws a completely unknown combination. Looking closely, he’s using three dice. So he has a lot of numbers to choose from, with each one apparently meaning something.

Obviously some numbers are more desirable than others, particularly in relation to what Death rolls. With his scythe at hand, he’s prepared to play the game and use it … if he wins. That seems fair. It’s not like he’s going out of turn and doesn’t have business in the vicinity. We have plenty of cemeteries around here, one big one just up the street. I go through there once in a while and look at the names and even pictures of people on their stones and the curious etchings. And you know what? About 90% have etched-in dice and a frown face! Now you know why.

Maybe that's where Chester got his concern. His old Dad died in 1975. His old Mom sometime too. Now he's throwing dice with Death himself and losing. Beads of sweat form on his brow, he starts to feel toasty under the arms, he might have to stand up and walk off the tightness in his overalls, which is really just the heat affecting fairly warm areas generated by the swinging and swaying of manhood still moist from a bath just this morning. Uncomfortable.

“Damn it,” Chester swears. “Damn it, not again!” he complains, with Death keeping a patient pose, a neutral display of equanimity, having all the time in the world. As if to say, “I’m in no hurry. I belong here. If anyone’s going away, it’s not me, no sir-ee-bob!”

At that moment Chester’s eyes are suddenly big as saucers. No one would ever think their eyes could be that big! But they're ginormous as he clutches his chest — heart attack! He cradles his head — aneurysm! He even grabs at his leg, what? Nasty bruise from bumping the bed frame! He prays, "Christ in Heaven, I’m dying here on three fronts!" That was Chester’s last thought, except for the sense in his heart that everything would still be OK. Suddenly he's found in angelic robes, his favorite overalls being replaced mystically just that fast, and he's adrift in the clouds, flapping his wings toward his heavenly home. That beautiful mystic sound clear and deliberate as a bell: "Flit, flit, flit."

Remember, friends, I'll never steer you wrong. But dice, those sons of bitches'll get you every time.
Posted by dbkundalini at 6:00 AM