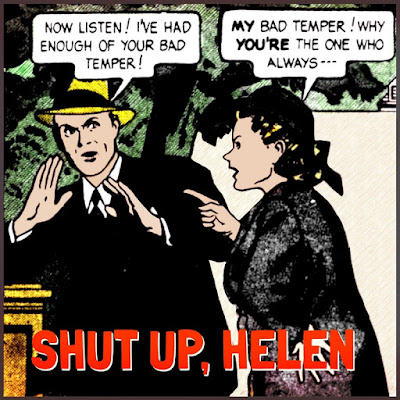 Here's some sad hotheads, Helen and McClellan, who in the end couldn't stand each other but never really broke up, perhaps going for some dubious award. We hear such stories occasionally but never expected it of someone we actually knew.

Of course I would've preferred they got along perfectly. The way it was at first for Helen and McClellan. Feeling up each other all the time. Bragging how they were made for each other. The only dinner guests I've had french-kiss at the dinner table. But it was a fairly wanton restaurant, the waitresses with their outfit down to here and shorts tucked in, a little wedged in back, a cute look.

For years they said McClellan completed her and Helen him. And everywhere Helen went, McClellan was sure to go. If McClellan ordered butterscotch tutti frutti, Helen chimed in, “Make it a deuce!” If Helen put a log on the fire, McClellan had a chainsaw near and ran out to fetch a single stick at the very least. Neither thought he was better than her, and her idea was just the opposite but the same. And each had a beautiful voice for lowly yodeling when the magic moment arrived. I overheard this singing down the hall a couple times, gladdening my heart. Only ruined by the squeaky bed springs; by itself it would've made a great ringtone.

How tough it was, then, to have them suddenly at loggerheads. It just started, no one knew why. They just bumped heads over every trivial nothing, and their hearts were beaten and battered in unnecessary struggles to the point of threatening one other, with his or her voice in full-throated derisive minor chords: “You go your way, I’ll go mine!” Countered with, “I will go my way, you go yours!” A tough read for anyone who knew them, his devotion, her devotion, and the devotion they had in common. Like two halves of your heart -- opposite sides -- shriveling up and dying.

And now more bad news. They're gone. And I don't know which I’ll miss more. McClellan was a friend. We were friends from our youth. Then there was my friendship with Helen, which started out me trying to avoid her as much as possible to keep McClellan's jealousy under control. But it turned out Helen was the most jealous, because I was more naturally drawn to McClellan as old friends. And boy to boy friendship action shouldn't have been an issue, because it's easy to be a friend without there being anything more. I wouldn’t cross that boundary for love or money, as crazy as Helen turned out to be.

But now it’s all gone by the boards. The days of what-ifs have passed. The time for finger-pointing’s still here but to no profit. Nothing, absolutely zero net unless it’d just be one of life’s lessons worth learning. That if you’ve got a couple of hotheads, it doesn’t matter what “love” they have for each other, they're going to eventually explode, and there’s always the danger that they'll both be foolishly annihilated.

It started out like nothing. But built from there. Each surreptitiously, completely on the sly, neither one suspecting, and their friends suspecting nothing, managing to accumulate an arsenal. And they studied up on homemade bombs. Someone should’ve known! Then rented out adjacent abandoned malls, such a huge unexpected undertaking that they could do it in plain sight without anyone realizing. Then coincidentally, without synchronization, each lured the other to their respective mall and each ... [if only I could've stopped it] .... plunged the plunger.

Yes, it happened, leaving a hole in our state the size of Wyoming, making the news. So now, after so much mushy romance, they’re dead and gone… Finis, done, outta here, BOOM! I have huge regrets. Seeing how mismatched they turned out to be, I myself probably should've killed McClellan and gone after Helen.
Posted by dbkundalini at 6:00 AM