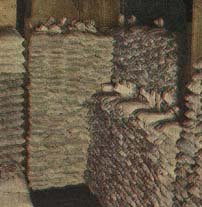 The electricity's been going out all day, off and on. We heard numerous explosions, great blasts. My sense of the thing is that it's either Al Qaeda blowing up the neighborhood or another thunderstorm.

I left the cellar once, to empty the bathroom bucket, but if the enemy closes in on us we might have to just sit tight and endure the smell. It's not a good option, of course, but survival is the main thing, not comfort. Grandma was up and down all night -- heck of a time for the trots. And there I am -- can't sleep anyway, my nerves are shot -- and she's over on the bucket giving it her worst. But the morning did finally come.

Anyway, with the electrical problems that meant this computer was going off all the time. But I'm doing my best here. I just hope there's someone out there still alive. If John McCain is reading this -- or one of his aides, assuming any have survived -- please save us. We're too young to die; that's definitely true of myself, I guess I should add.

It's only been one day and already I feel like I've got bunker mentality. It's very tight quarters in here with the stores Grandpa packed away. I'm looking at some of the bags of this stuff. Rice, beans, powdered water. All of which seems OK. This is not going to be pleasant if it lasts too long. But how long is it going to last?

Let me pause a moment here, to think...

I guess, I don't know, maybe, could be ... I probably should've waited for some official notification from the authorities before going to the cellar. We came down here simply on reflex, it was her idea. But when you think about it, you know, McCain only said he would have an "advantage" if we had another terrorist attack. But -- I think I'm on to something important here -- you know, if you parse that out, then take it in the literal sense of the words, really that's quite a bit different, that's removed from an out and out actual declaration that Al Qaeda is already on their way. And the assumption that they would first attack a rural neighborhood like this, here at the edge of town, on a gravel road, is something else to reevaluate...

I need to take another look at this print out ... looking at it here -- rereading it -- I think the plain sense of this document is absolutely clear, that all of it seems to be merely hypothetical. This in no sense reads like an actual warning, nor, quite frankly, do I see any directive, any instructions as to what citizens should do at the present time -- which you would expect to see if it were like other emergencies; they always have some notification component. Hmm, come to think of it, we had the radio on most of the day and they didn't say a word about it.

But there's Grandma Slump sitting there in her civil defense helmet, rocking slowly back and forth, drifting in and out of intense alertness. I might have to suck it up and take the blame here. So she got siren happy! She's old, and entitled to a certain extent! Well, I'm sitting tight for the moment. Maybe. I'd hate to get up and disappoint her and tell her we're wasting our time down here. She might not believe me. She knows I swing Democratic. She might take it as a personal affront, since we got this alert from a Republican.

But she's stirring a bit, shifting uneasily, and that's what she does when she's fixing to use the bucket. I might get sick. I'll turn my head, of course. There's nothing I want to see. Especially in her sickened condition. Basic hygiene and all that, it's lacking.

One more night of this and we'll reassess in the morning.
Posted by dbkundalini at 6:40 PM