The Terrorists Are Coming Again! 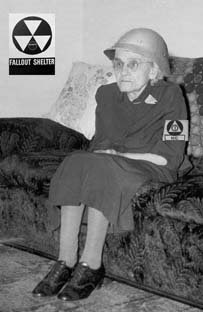 Those darned old terrorists are coming again -- since it's an election year!

It wasn't enough that they got lucky on 9/11, but they've threatened us and scared us out of our everloving wits ever since, like clockwork at two year intervals.

As sure as anything -- it must be her instinct -- Grandma Slump perked up at the news that they were on their way again, and she's been grinding out that old siren I got one time at an army surplus store.

That's my cue to get to the basement. There's really something about the paranoia of a 104 year old woman. It's not constant but it's very intense in spurts. In those lucid moments she has the urge to survive like a young sprout half her age.

This all started with John McCain raising the very real specter of Osama bin Laden just over the next horizon. Grandma's always been for the Republicans, since she knows no one can protect us like they can -- like they did on 9/11. I've always been pretty much a Democrat, but as soon as the news starts chattering about terrorists, and when Grandma starts cranking that siren, there's nothing I can do but submit and look to the Republicans for protection.

Charlie Black really got it going, saying what an "advantage" terrorism is for McCain. And McCain himself has agreed with that verdict in the past, as I think we all do. Yes, McCain's the man to keep us safe! If we vote for McCain we will be safe! Although, truthfully, all we have to do is get him elected and make it past election day in November, and then, if history is any guide, the threat will subside significantly. So that's a pretty big relief.

Well, that old siren's going off, so Grandma must be awake again. I have just a couple minutes to wish everyone out there well, then I'll head for the cellar. She's already down there, of course. We're ready for the long haul. We've got a bucket for bathroom necessities. And all those boxes of civil defense rations -- crackers and canned meat -- Grandpa put down there in the '50s. I hope it's still good.

Remember, world, if this is the last chance I'm able to communicate with the outer world for the foreseeable future, all these problems with terrorists will be solved if only we have the good sense to elect the Republicans.
Posted by dbkundalini at 3:16 PM