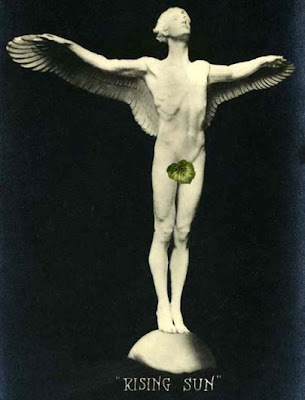 There was a song that kept running through my mind all night, "There's got to be a morning after if we can hold on through the night."

I'm by nature an optimist and like to look on the bright side. Even if the terrorists didn't strike -- the Republicans somehow stopped them -- being in the cellar was a good drill. It showed how prepared we were for the worst. And as far as I'm concerned we're a lot stronger for it.

We're wiser for it, too, because I was able to discover in real life testing what some of our shortcomings are. Now, if I tweak those and touch up the conditions of our confinement, we'll be doubly prepared the next time there's a terrorist scare. And don't think it won't happen! That would be a September 10 mindset. Constant fear is the best course.

Grandma's back upstairs, on her bed right now. She was beat -- physically, emotionally -- completely spent. I haven't seen her this wrung-out in a long time, I guess since Grandpa's death. And that was 30 years ago. And she was a lot younger then and could take it. Now she's practically at death's door herself. It took me a good half hour to get her up the cellar stairs; stopping and starting, clutching at her heart. Her poor old frail body can't take much more of this. But somehow, someway -- a lot of prayer and patience -- we made it, both of us staggering, she in a state of collapse. After that, it was literally all I could do to prop her up at the stove to rustle me up some breakfast.

Now the evaluations must begin. The biggest downside I saw in this whole experience was the sanitary facilities. The bucket. It would be much better to get one of those camper toilets -- I think I've heard of them -- where there's some kind of really hungry enzyme in there, in the millions, in a constant state of anticipation, that helps keep it clean. Or possibly a chemical dissolvent, something that would neutralize the whole works with a minimum of fumes and sizzling. And that wouldn't attach itself to us! You think, though, you're down there, helpless, and anything could happen. I can see myself living in the fear that an enzyme or a chemical like that might attach itself to us, and essentially eat its way up and out our mouth! So we'll probably keep the bucket handy till I work through some of these things.

And there were other obvious downsides: Cooking, cleaning, ventilation, lighting, no generator, old supplies, dampness, everything else. Plus, I left my gun upstairs. If the terrorists had come busting in, we'd have been dead meat.

It turns out survival is a tough business, something that needs a lot of planning. About the only thing that worked well was the duct tape on the door cracks, but then that also gave us more ventiliation issues.

Last night was a long one, but in the end we came through it OK. Now Grandma can rest up through the morning -- till lunch time. And then we'll see what the rest of the day brings. But I'm looking out right now at a beautiful day. The terrorists didn't come! Somehow John McCain kept us safe -- I guess -- but we also had a hand in it, bravely doing what we could.

And we'll do it better next time! Because it's not a matter of IF but WHEN.
Posted by dbkundalini at 9:08 AM