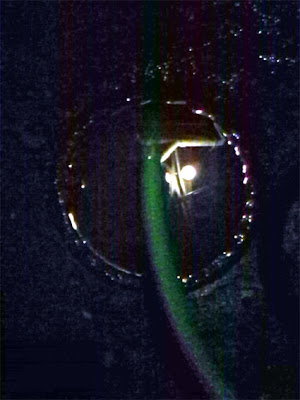 I've been involved in a plumbing project today, since there's ice in the pipes. That means the toilet isn't working in the sense of being able to drain. It could potentially be a mess, like if someone had to go, then went.

How much easier it was back in the days when we had the outhouse. Then the only thing that froze up was us, but fortunately we didn't literally freeze till we were on the way back to the house. It explains the motto on our family crest: "Step Lively!"

But with the passing of the good old days we have this new fangled system. So when the fangled gets tangled we suffer in a different way. Like trying to get it cleared out. We could wait till May ... or we can run hot water up the pipes until we clear the ice blockage.

I was manning the drain with another guy. Then he had to go on an errand, leaving it just me and the drain. I was sitting there thinking how low I was, right down with the foundation of the building. Me and a flashlight and a hose sticking in the drain. I could see the light bulb reflecting from the tiny pool at my feet.

It made me start thinking about the chakras, those energetic power centers in the body, the microcosm of a larger (presumably) macrocosm, that is the universe. I say 'presumably' because I'm never 100% sure the universe is actually larger than me, although the theory sounds at least reasonable.

I snapped a few pictures of it, including the one above. Look at the glistening of the outer ring. Then the energy of the serpentine hose pumping svadhisthana-like waters who knows where, an ice core somewhere up the line. The light dangling reflects itself, which I can cover with my thumb -- very cosmic. Many allusions from meditation suggest themselves.

Looking down at it, first I'm very impatient: "Get the ice melted please." Then with increased concentration, I'm thinking, "I'm here at the very base of the property, seeing my body's energy system mirrored at my feet." Let yourself go. Make the most of this time.

A frozen drain is a terrible thing to waste.
Posted by dbkundalini at 1:55 PM