The Way They Were -- Sometimes We 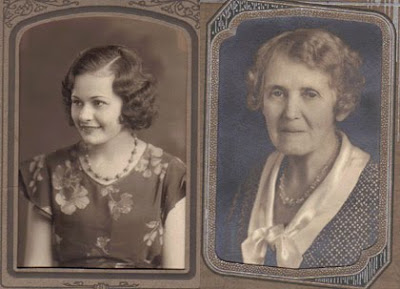 I got these pictures the other day at a thrift store. It must've been a deal where someone in their family (or families) didn't know who they were anymore -- there's no identification given -- so they got rid of them.
Being a kindhearted soul, and knowing that adopted pictures don't eat much, I took them in, with an adoption fee of 50 cents apiece being paid to the attendant.
I think one of them is pretty cute, and I'm not saying which. I don't want to hurt the other's feelings. But the other one has a distinguished look and has nothing to be ashamed of. When I'm that age I hope I look as good!
But however good I think they both look, you can't deny that they look old fashioned. You see the pictures and immediately you think, That was the olden days sometime. Which must have been uncomfortable for them at the time. Walking around with everyone saying, Why the old fashioned look, sister?

I'm just kidding, of course, because back then they all looked like that. They had an old fashioned look because that was the fashion back then before we junked it and did something different. Elvis launched the sexual revolution and we never looked back.

I've got some old timey pictures of me as a kid. There's a picture of me I see almost everyday of me standing by one of Grandpa's Chevys, either a '56 or '57. It's awesome that Grandpa had a '56 Chevy, without him ever dreaming or knowing what they bring at antique car shows now. We'd ride in it without knowing we were riding in a classic.
Another old timey picture -- three different ones, actually -- show me in a baby swimming pool. My parents and I lived right here on Grandma and Grandpa's half acre in a tiny house over by the well. When I say a tiny house I mean it was as small as a house can be and still be a house with people in it. When they took it away it sat on the back of a truck and didn't need a "Wide Load" sign. So that little house is in the background of these pictures of me in the baby pool. And they were taken at just a slightly varying angle, each one, meaning that you can see a stereo image of the house if you hold them side by side and let your eyes drift them together. That thrills me. A stereo image of a house that's not there. It might not be anywhere anymore. Although as an adult, maybe 30-35 years ago, I went to it in the town where the truck took it. It was small. But somehow I didn't take any pictures. Dumb.
The pictures of Grandma and Grandpa taken in olden times show a normal young couple, not knowing what would happen to them in the future. But they looked confident enough to keep living, as indeed they did. One of my favorite pictures of Grandma is of her playing in the snow with a friend. She must be a teenager. She's seen in the picture from the back, like she's darting away from a snowball. It's very vivid. She's in motion, a kid at play. It's the best picture I've ever seen of people where you can't see anyone's face.
Advice to everyone: Mark your pictures. Put your name on there lightly on the back. Otherwise someone will throw them away. Then a guy like me will buy them. And they'll end up on his blog about the olden days.
Posted by dbkundalini at 4:51 PM