How To Undress In Front Of Your Husband

Prepare to be stimulated!

Since I don't run anything "blue," I'm going to have to be extra careful with this post. So I'll say what I can, then try to leave the rest to your imagination. 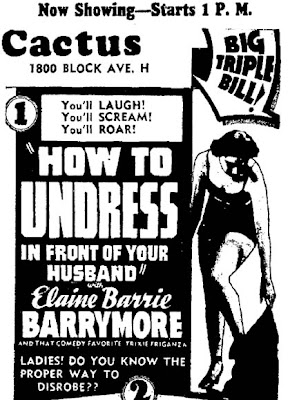 In this particular ad it was the first feature of a triple bill. The ad is from The Evening Journal, Lubbock, Texas, April 4, 1939, p. 10. 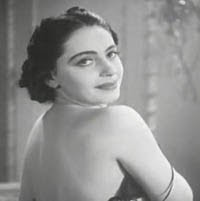 The movie stars beautiful Elaine Barrie Barrymore "and that comedy favorite" Trixie Friganza. In the course of the film Elaine shows us the intriguing and proper way to disrobe in the boudoir, while Trixie has a bad time of it in her room.
It's mostly narration by a male narrator and silence from the two stars, but Trixie emits a few discouraging groans and a few words of frustration with her presentation.

The narrator has a lot of admiration for Elaine, but nothing but jokes for Trixie. 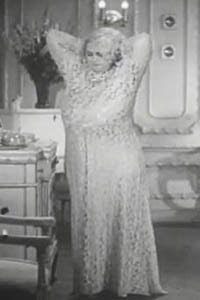 About Trixie, he says, "That other celebrated taker-offer may be able to show us a few other wrinkles ... These ladies are all here to learn how to undress, they're not interested in how to take down an awning ... Isn't that awful. The S.S. Normandy is in ... Really ladies, I'm terribly sorry. This sequence has turned out to be a perfect bust. Well, anyway, a bust."
Then when we see the lovely Miss Barrie she's taking off and rolling her stockings. The announcer says something is coming off, "Oh yes, of course, the stockings. She has lovely eyes, don't you think? Well, to tell you the truth, I hadn't noticed them myself. There's a delightful nonchalance about this little lady. A studied indifference that is certainly effective. Invariably she keeps you guessing as to what she'll do next. A trick which never fails to intrigue the average husband. When Elaine rolls them, they stay rolled." Then with a laugh, "I mean the stockings, of course."

The film is a short film, and someone has it at YouTube, in two parts:

Part 1 has a few skips in it, but it's still pretty good.
Posted by dbkundalini at 6:50 PM