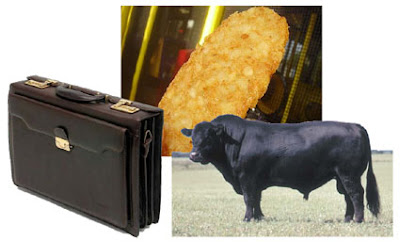 Here's my new character, which I won't be doing anything with except introducing him. And I'm in a hurry at that, because I have a dental appointment within the hour. But I'm taking these few minutes to mention him just in case there's some competitor out there who might try and beat me to the punch.

So let's be quick. He's Percival A. Hashbrown.

I thought of this guy yesterday while enjoying a McDonald's hashbrown. I think of things while eating these, like what these poor potatoes have been through on their journey to be an actual hashbrown. It doesn't take long to eat one, so their long journey doesn't end up with much of a payoff. And once gone, they seldom come back up. It's strictly out the other end ... in an unrecognizable form.

So there he is, Percival A. Hashbrown ... quite a name, huh? And quite a character, too, I might say. He spends his day next to a briefcase and a big black cow.

Ohhhh, you're quick! Of course all of us recognize the obvious allusions -- I know you do, referring of course to the famous wrestling manager of the '70s, Percival A. Friend. But just for the sake of future social archaeologists, who will have a constant eye on my blog archives one thousand years hence, as they try to reconstruct the broad outlines (and details) of the mid to late 20th century and early to mid 21st century, depending on how long I live .... For their sake I will sketch out my memories, and our common memories, of Percival A. Friend.

Percival actually has his own website, appropriately named PercivalAFriend. A few short years ago there was virtually no reference to him, so it's good to see that he's staking out his own piece of the history, again, for the benefit of social archaeologists.

As we all remember, Percival was a wrestling manager in the '70s, in my memory most famous for managing Black Angus. Hence, the black cow in Hashbrown's universe. Also, Percival A. Friend carried a briefcase, which you will also see in Hashbrown's universe. With the briefcase, either loaded with lots of very heavy personal papers or a brick, he was able to have an offensive weapon against other wrestlers and referees.

My most favorite (or standout) memory of PAF was when he "accidentally" (since there was no doubt a script) clunked Black Angus in the head with the briefcase, meaning that from that moment there was an untrussed rupture in their relationship. PAF was out of a job insofar as his most recent employer was concerned. Black Angus had a look of stunned disbelief, not aware, apparently, that accidents do happen. It awakened him to the truth that a danger to others might also be a danger to you, especially if you're in the wrong place at the wrong time.

Did I ever personally see Percival A. Friend? Yes, I did. Either once or twice. Definitely at least once. And if I could've gotten my hands on that briefcase, there might've been hell to pay. But this incident being at the time the present moment and not a past moment of memory in which anything might've happened meant I wasn't able to do it. Had I done that, they would've taken me out, or I might still be hanging from the rafters of that particular school gym, up there with the retired jerseys and numbers.

Did I ever lose track of Percival A. Friend in the meantime? Yes, I believe he dropped out of sight, at least my sight, since our interest in professional wrestling waxed and waned and eventually was extinguished. Now we simply have those pleasant memories of being young adults out for a pleasant evening of a ringful of guys apparently beating the crap out of each other. Oh, the names, Harley Race, Rufus R. Jones, Bob Geiger, etc. It was cool seeing them in real life, cool at that moment. AND ... Percival A. Friend.

Anyway, I need to go. I just wanted to get Percival A. Hashbrown's name out there, as well as make sure Friend's story was fully documented for the sake of the archaeologists, who -- what? -- otherwise would've had to depend on his personal website being well archived. And that's no good. You need the full force, the full faith and credit, of Google and their own personal archives -- i.e., Blogspot to make sure 1,000 years comes and everyone's not disappointed.

My dentist awaits! There he is, for the whole world to see, my new character (whom I will probably immediately forget) ... the Great .... Percival A. Hashbrown!
Posted by dbkundalini at 8:35 AM