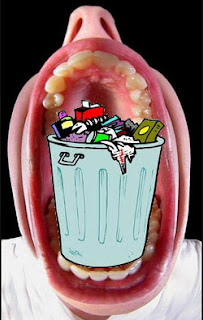 (The idea for this post came to me before the recent call for civility that resulted after the Arizona congresswoman was shot. I thought about toning it down -- but really it's not that bad. And anyway, the Republicans are already back trash talking, so the rest of us are already playing catch up.)

Really all I wanted to say was that we need more trash talking. Not necessarily aimed at me, since I wouldn't care for it, but in the contexts where it's most entertaining. Like in sports. And a few other places.

It happens like this. There's a big game Sunday, and a player from the opposing team says something inflammatory, and now it's in the paper and the other team has it posted in their locker room. And now they're very upset, and they've vowed to get revenge against him. Maybe he insulted the coach, the quarterback, or the cheerleaders. And certain things you can't say, and certain things you can't let go once you've heard them.

We used to go to professional wrestling matches. By the way, I'm still looking for some authoritative stats from those days, but it looks like they didn't keep good records. For example, some of the world championships I witnessed personally, it looks like no one wrote them down. How that can be, I don't know. But anyway, I'm talking about trash talking, and they were very good at that. Extremely good, almost to the point that they didn't do much else. A wrestler would take the ring, get the microphone, then taunt someone backstage. And it was effective, too, because invariably he showed up for a terrific fight.

Why we have to suffer so much Mr. Nice Guy these days, it's boring. I love an inadvertent comment, then a grudge match. Because what's said can't be unsaid, and forgiveness is strictly out!

Speaking of forgiveness, of course that's the realm of religion. And you don't think of religion folks to be into trash talking, but once in a while they are. Any religious group I read about, I go for their "Statement of Beliefs." I did it just today. Some of the fringe groups, the independent fundamentalists, they do some trash talking in their statement of beliefs. You can tell they're combating everyone else who believes differently. Like with the devil. They put right in their statement, "We believe in a personal devil," etc., like that's really a statement that needs to be made by religious folk. Face it, if you put a positive statement about a devil in your statement of beliefs, you're claiming him as one of your own! LOL. But as long as there's modernists out there who know the devil's a bunch of hooey, there'll be a place for trash talking.

I'm very interested in the latest (idiotic) prediction of the "Rapture," which is now set for May 21, 2011, not too far off. The perpetrator of this latest prediction is the already-failed prophet/preacher Harold Camping, who also made a dated prediction for the '90s. Some people never learn! What precisely he's going to say on May 22 when this prediction fails, and of course it will, is anyone's guess. Maybe he'll say, "Oh, did I say 2011? I meant 2012." Or 2023, by which time he'd probably be dead of natural causes. Because I think he's fairly old.

I used to listen to this old quack on the radio ... in the '80s. The other day I read his Wikipedia page, and it heartened me to see he modified some of his hardcore Calvinist beliefs of those days. I'm surprised I hadn't heard about it until just the other day. But he was part of some denomination that had those beliefs, and, with a break from that, apparently he latched on to some other kind of "truth." Overall, though, I have to conclude he was a flake in those days and he's still a flake today. His prediction will fail, guaranteed. Then what?

But still, remember I want more trash talking. And making crazy predictions and sticking with them is the trashiest trash talking religion has to offer. Because you're putting it in everyone's face and, if they're really dumb, they might think you know what you're talking about. It takes a tiny bit of skill (not much really) to see there's always something arbitrary about the way they correlate verses and dates. Just insisting on literal interpretations for this stuff is itself an arbitrary, culturally-bound hermeneutic.

Politically, of course politically there's lots of trash talking. The Republicans are better at it than the Democrats. One thing, they don't really care about the truth, so they can say any and every little idiotic fantasy on their minds (cf. Limbaugh, Rep. Virginia Foxx, etc.). The Democrats have a tougher time, since they have some ethics about sticking to the facts. I also like the facts -- like what I said about pro wrestling records -- but I also want that in-your-face chewing out, with the Democrats able to chew with the best of them. Whether it'll ever happen, I've got my doubts.
Posted by dbkundalini at 7:18 PM