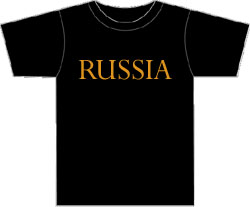 I was at church yesterday, and I thought it was a little odd that a teenager a couple rows from me had a T-shirt that said "RUSSIA."

That may be perfectly acceptable these days, but I was talking with someone, that if he had had that in the '50s they might be investigating him.

Or the '60s, since that's when we remember so well the phrase, "Love It or Leave It," meaning America, and "If you want to ____, why don't you move to Russia where you belong?"

Back then, the place was Reagan's "Evil Empire" even if it didn't have the label yet. We were so afraid of the Russians that we thought about sleeping under the bed just to avoid them. Like in the event of a nuclear war. Neighbors were posted at the edge of town (which I don't remember firsthand, in the '50s) watching for signs of them flying over from Canada. I could barely imagine the Russians as actual people like us, since we were told over and over how bad they were.

Now, of course, we've let bygones be bygones, and it's one big happy world, no enemies except the terrorists. And they've been reduced to underwear bombs and an occasional smoking shoe. Not the kind of thing the average kid's going to lose sleep over. We certainly don't fear the Russians -- at least I don't. Now they're just a picturesque foreign country that everyone would like to go to if they could.

So now you can go to church and a kid can be sitting there with a "Russia" T-shirt. How many years till "Al Qaeda" will be perfectly acceptable?
Posted by dbkundalini at 7:44 PM