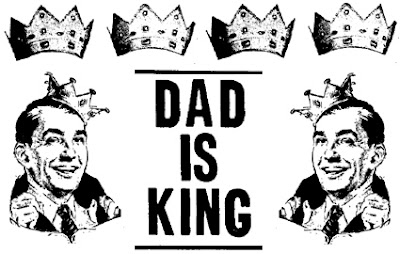 Today is Father's Day, the day we honor Dad as our great sovereign and king. It's his day to do with whatever he wants, to put his feet up, to take it easy, and to receive the adoration and acclaim due his name by his children.

What a great thing it is, for him to wake up and have the whole world, especially his own family, let him know that we recognize and submit to his leadership, giving praise for the benevolence of his rule. We bow before his throne, happy to render him heartfelt obeisance.

Dad can put his feet up today and let all the worries of the world melt away. We will not let anything spoil this day for him. If he wants to watch TV, he may, to his heart's content. Or if he gets tired of that and just wants to drop his head and doze off for a while, that's OK, too! His will is our own, his every wish our command.

We are here in the world thanks to our father's seed. It was the biological imperative, perhaps, a species thing, mixed in with the ordinary fleshly desires of the human male, that brought him to a relationship with Mom. Then, through both their wills, somehow, in some way they have not specified to us, they came together in a deeper way. It is mysterious. Above the world, in some dark place, there was a sudden spark, then an instant descent of a soul into Mom's womb. That became me. Then it happened a few more times, the King and Queen together in their quarters.

For something like that, I am most thankful. Surely with my very existence at stake, I can be nice enough to honor him on his ordained day. And I do!

Make way! Prepare the regal robes! Roll out the red carpet, the best one we've got! The King is passing, our dad, processing toward his throne, from whence we await his word, his will, and, if he so deigns, a wave and a smile.
Posted by dbkundalini at 10:41 AM