FEELIT Prophylactics - Got To FEEL IT 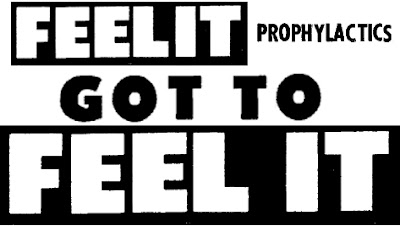 Of course that's a very familiar sticker to any guy who's ever been in a public bathroom, from truck stops to churches, wherever you go, coast to coast. I make a mental note when I see one, and usually roll my eyes in disgust that once again there's one of those damned stickers on the paper towel dispenser. With a "Feelit" vending machine always off to the right.

I don't want to go all confessional on you here, but this is the honest to God truth, I've never had one, ever. But I remember even kids in junior high school, who weren't about to get lucky, no matter what, would be carrying Feelit rubbers in their wallets. They had them for years! It pays to be ready, but five or six years in advance?

I'm only writing about it today because I was talking to an old school friend who I haven't seen for years. We reconnected on Facebook. Glenn Smiggens. Of course we exchanged pleasantries, then got to, "What are you doing now?" I told him about my disability (game toe) and that I wasn't working, and he told me he was a district manager for the Feelit company. I'm like, "The rubber company?!," since I couldn't believe it, but I didn't want to get judgmental about it, since a job is a job. I actually had some excitement in my voice rather than disgust, although it was hard to do.

So there's something for you! I have an old friend in the prophylactics business, meaning I might be able to get them wholesale if you need some. I asked him how all this came about, and he told me the usual story of getting an entry level position, then sticking to it as they moved him in and out of different slots, until he worked himself up, and now he's positioned over a couple of our major states, Colorado and Utah.

He told me it's not as glamorous as it sounds, that there's a constant demand to perform, and that sales have been somewhat flaccid with the recession. 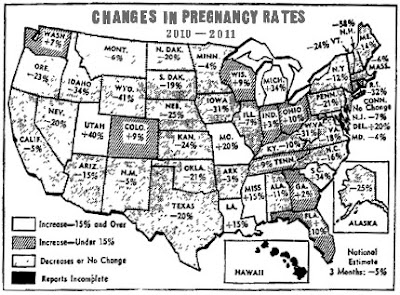 He had an interesting map uploaded on Facebook to show some of the challenges in the last year, that pregnancy rates are up in both his states, with Utah seeing a 40% increase and Colorado at 9%. This might sound like good news, but they apparently don't see it that way in the prophylactics business. Especially when the surrounding states are in minus territory, with Wyoming even having a whopping 41% reduction!

"Smiggens," his boss said, calling him on the carpet, "What is this? What have you been doing? Sluffing off? We knew your sales were way down, but obviously the demand in those states was just as great as ever! How many of your machines were empty when our gentlemen customers came a'calling?" That's tough, even to read -- imagine how much worse if you had to hear it in person, and you were standing there nude and shamed in front of the entire Board of Directors.

In his defense, I might point out that Utah is a notoriously conservative state. I'm surprised that they even allow Feelit machines in Utah, so I can see how that'd be tough. Then if every man has five or six wives, and every boy five or six girlfriends, and you miss one sale, you've missed a dozen. Nighttime comes, and bang bang bang bang, you've got another four kids. I wouldn't want to be the district manager of a rubber company in Utah for anything. There'd be more money in diapers.

As to what's the trouble with Colorado, I'm just guessing, since it's mile-high, maybe Feelits keep popping from the greater altitude. The guy looks down and it looks like a blown tire, why's he going to waste his money after that? Still, a 9% increase isn't so bad when you compare it to Utah. But next door Nebraska and Kansas are down over 20%, so Colorado still looks terrible. The real problem might be a few horny Utah guys coming over the border and each getting five or six girlfriends. They'd buy some Feelits if they thought the machines were stocked, but, again, if the altitude screwed them up, that'd be another problem.
Posted by dbkundalini at 3:23 PM