The Miracle Of Email 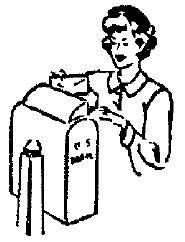 I'm getting ready to check my "email," another way to say I'm going to click a virtual button and let my computer find out if anyone has written to me. Just let me pause here a few seconds, and go down here -- it's always on -- and, push, there it is going out wherever it goes; it's compiling a list and readying everything so that I the reader can see what I've got. Which this time turned out to be nothing.

I'm glad it's nothing. That means there's nothing I need to worry about, nothing to open and respond to, no tasks that need to be done like scanning something for someone or going to look up an answer to some relative's question. But it easily could have been something, and if it was that would have been OK too. An advertisement from Amazon.com about an album that came out today. They're very faithful about writing to me with such news.

I'm still happy for the miracle of email, getting to jot a note to someone and send it to them without having to buy a stamp. You might think there's the disadvantage that a lot of people don't check their email very often -- which is true -- so whatever I write might languish in their in-box forever. That's true, I've had that happen, in which cases it's better to use the miracle of the phone. We're past the days of dial-up when the miracle of the phone was thwarted by people online all the time and having busy signals. Someone I'm thinking of was online all the time and let their email languish, so that was the worst of both worlds.

And speaking of having to buy stamps, I've got a letter I need to mail right now and I'm fresh out of stamps. Meaning I need to go buy some stamps before I can get it done. Although you can do that online too, but I still haven't done it. When I need stamps I always need them right now, not tomorrow... Still, relatively speaking, we use a lot less stamps today than we did years ago. And it's not entirely because of the miracle of email -- emailing is good but it's not fail-safe, but mostly because of the miracle of the phone.

The phone is one of our older miracles that's still good. We've had it ever since Alexander Graham Bell first built one. A big old box phone that he hooked on the wall, with a mouthpiece as big around as a pie pan. In later years they miniaturized it, but still you had to have it hardwired in your house. I can well remember having to rent a phone from the phone company. That's just the way it was and the way I figured it'd always be. They were very finicky about getting them back, too. I remember, though, one time, somehow we still had the old phone from the phone company, after a move. I worried about that for a long time.

But back to email. I remember my first email account, and what I was thinking at the time, "What hath God wrought?" Then email quickly went to the dogs, with spam accounts. I don't get much of that anymore. They've devised filters for it, so I'm not sure who's still getting the thousands of messages we used to get. One time I compiled a large graphic of penis-enlargement spams, just the headers, and it was very amusing, but somewhere along the way it got lost.

Anyway, time's up. I have to press on with my day, and wonder, what emails will I get before the day is over? Not very many, I hope.

UPDATE: I was thinking of how fast email became old hat. That's a weird thing, how fast things become passe. If they would've told us 40 years ago that we could mail people from our desk and get a reply in a couple minutes, we would've said, "Wow!!!!!!!!!" But after about the first week of email, it was ho-hum.
Posted by dbkundalini at 7:15 AM