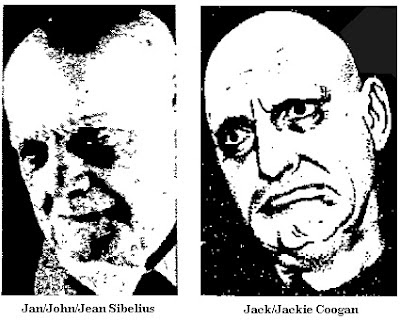 Today I'm going to show you my cultural side, that I'm able to swing culturally with the best of them, critics, reviewers, various experts.

The subject today is music, and in particular, classical music, also known as the most mysterious form of music there is. The purveyors of classical music, except for Leonard Bernstein, and, as I've recently discovered, Sibelius, all lived hundreds of years ago. They died and that was it, the classicists were gone.

But somehow Sibelius made it to more recent times, having died when I was four years old.

I bring all this up because I have a CD by the composer called Sibelius. There seems to be some dispute -- I'm going to call it a good-natured debate, i.e., without rancor -- as to what his first name was, Jan, John, or Jean. It seems like a simple glance at his long-form birth certificate might clear it up, but that's a controversy for another day. We will simply state as a matter of fact that it likely starts with J.

I'm looking at my picture of J. Sibelius, and the first thing I notice is that he looks like Jackie Coogan, aka Uncle Fester, which might be why everyone liked him so much, assuming they did.

OK, the CD I've got is a symphony called No. 2, indicating to me that he probably also had at least one other symphony. That's two more than I've ever written, so I won't mock him  for it. No. 2 is called "Finlandia," so I'm guessing he was a big fan of Finland. To me, that's closer to the North Pole than I ever want to be. If he was from Finland, no doubt he wrote music by the light and warmth of a very large candle, although unless you have more than one wick it doesn't matter how big the candle is, you're going to get the same little flame. So much for candles.

My commentary on Sibelius is this, his name sounds like the name of a substitute teacher. "My name is Mr. Sibelius." "Good morning, Mr. Sibelius." Being a nice student, I probably would have offered to stay after class and clean the erasers for him.

Other things we could say about his name, it's kind of like the Sibyl, the fount of all knowledge in the ancient world. "O mighty Sibyl, should we attack the Huns, or just leave them alone?" Or how about this? The S sound -- Sibelius starting and ending with an S -- makes me think of lispers, with many sizzling sibilants spitting forth from his lips, "SSuffering ssuccotash, you sstudents sstay in your sseats!"

Update: The picture doesn't do Mr. SSibelius any favors, I know. But in high contrast black and white, everyone looks like crap.
Posted by dbkundalini at 10:01 AM