The Oldest Powder In The World 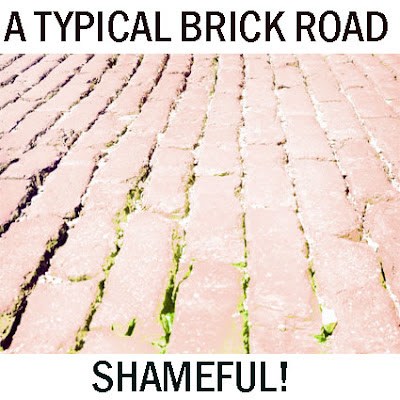 I hate brick roads. Just hate them. In fact, you remember all those letters to the editor in the newspaper from the guy who hates brick roads? That's me! So there you have it... I have a track record on the subject... I have credibility.

Why, one might ask oneself, would they ever have made brick roads in the first place? I'm thinking maybe back then they didn't have cement. A guy would need to find out when they first started mixing cement to know for sure. Or it could have been that they had cement but it wasn't very good. A brick, on the other hand, can be tempered and hardened, whereas poor cement will instantly go to chaff.

If that's really the reason, then I guess I'll have to accept it as a pretty good reason. You can't be driving six white horses, as they did back then, down a poor cement road and have them sink to the top of their fetlocks in chaff. But that's been a long time ago, and I know cement's come a long way. I used to have an uncle who poured cement and he often spoke highly of the stuff.

OK, cement's come a long way, we all agree. And yet still we suffer old brick roads from the 19th century. It's a disgrace! Because bricks go haywire. They're small individuals that can go cockeyed any minute. The ground sinks somewhere and they're raised up on edge like icebergs. Which can take out a ship, as we all know!

One of the reasons we still have brick roads, like it or not, has to do with people's sense of nostalgia. Since bricks have been around for a hundred years, Oh good God, we can't get rid of them now! Which doesn't make a bit of sense, because if they're bad, they're bad. And they're not going to get better, only worse. Then when they get worse, we can't get rid of them then, because by now they've been around a hundred and twenty five years. And on and on. They're always going to get worse, and they're always going to get older.

Eventually then -- and the ancient Egyptians knew something about this when they made the pyramids -- they'll be so old, they'll crumble away to powder. But because the powder is so old, and we're so nostalgic, we certainly can't get rid of it. So we eventually end up with the oldest powder roads in the world!

Maybe it'd be good for the bricks to go totally to powder. Because then we could mix it up with new cement, add water, and have the old road incorporated with the new. And everybody would be happy. Whether that happens in my lifetime, though, I'll just have to wait and see. But if I die first, someone else will have to check for me.
Posted by dbkundalini at 7:48 PM