The National Loners With Guns Registry 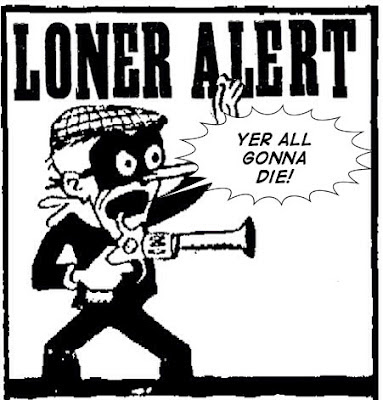 I've been trying to think of some way to stop all the senseless gun violence we've been suffering, without infringing on anyone's rights. I have to agree with our most rabid gun proponents -- Second Amendment enthusiasts -- that, yes, obviously this is what the Founding Fathers had in mind, every crazy person being able to stockpile his own arsenal with no restrictions whatsoever. When they wrote about "a well regulated militia," what they clearly meant was, "Every man for himself with nothing to do with militias or well-regulations."

That established, agreeing to the obvious sense of their phrasing, society (individuals who don't feel like dying today) has discerned some desire to keep crazy assholes from going off full-cocked, ballistic and dangerous. When a person goes nuts with guns -- whether it's an arsenal of just one gun or a million -- the results can be unpleasant, in fact deadly. But what can we do about it? That's the question. We can't restrict guns in any way, of course. But we can do everything short of that, in the spirit of "An ounce of prevention..."

Let's look at what we have so far, as in time we have looked out over the bleak landscape of apocalyptic America. The people committing the worst violence have been loners. Loners. They're alone, sometimes they're OK, but the rest of the time they're seething about one thing or another. OK, with that we've been able to piece together the first scraps of a pattern, which I believe is full of important insights. We've concluded that since the perpetrators are troubled loners with guns, these are the ones that need to be watched.

Of course we ideally have to start with the loners before they become troubled. If we get a preliminary census of loners that will be an important first step in monitoring them and whether they're troubled. Every 10 years, five years after the general census, we have the loner census. We do it the same way they do the other census. We go door to door and find out how many loners live there? If they say more than one, we figure they're lying and just put one.

Then we discover if they have guns. And we make a registry of them and their arsenals. Then we check on them periodically to make sure they're not troubled. If they are troubled, we check up on them more frequently. If we find they've been buying ammunition, or they're doing drills and maneuvers in their backyard, we check up on them even more. If we see them in weird face paint, hair oddly colored, a dazed look in their eyes, in full combat gear, and with their arsenal in their cars, we put some kind of robotic device on their motor that will automatically drive them off a cliff. Good riddance. Then we cross them off the registry, making room for others.

It all starts with the registry. Because if we don't know who they are and what they're up to early enough to prevent the next massacre, by the time they go berserk and kill half the town, it's virtually too late.
Posted by dbkundalini at 7:56 PM