Sarge: Of Men And Mousetraps 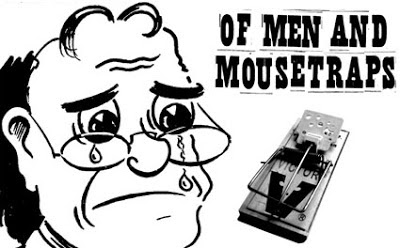 Here's another episode, entirely true, from the life of Sarge, a guy I also call Walt.

I hadn't seen Sarge (Walt) in some time. I was saving my money, trying to avoid handymen, if I could do it myself. But then I needed something only a specialist can handle, to have my mousetraps recalibrated. Too many are escaping, either scot-free or only minimally crippled.

Of course Sarge has the skills and tools for the job. He has a real touch with a mallet, a native intuition that puts man one with machine, a level of interaction I'm not good at at all, let alone being a master. For this particular task, you have to know exactly what to do to do it right, bringing together multiple skills, involving BBs, match-heads, and a careful awl. I stabbed my leg and managed to burn a toenail last time I tried it...

Anyway, Sarge came over, and we were out by the garage. He got out his mallet and began the meticulous work at hand. I sat there watching him with affection, making a mental note that the Old World techniques are almost a lost art. Kids today, who never escape our criticism, with their video games and parental pampering are total fools. Not like Walt. With the extra added bonus that he's able to tell a good yarn without referring to the idiocies of modern trivia. His stories go way back.

Here's something you might not believe. As man and tool worked along, and as I engaged him on the old days, Sarge seemed to become noticeably younger and more vital. And none more so than when I said something about Vietnam. I repeated the old (true) legend that I was "up for the draft" two times but my number was too high. Of course Walt had enlisted and worked his way up to being a sergeant.

Once he got going, his tongue loosened up, and the mousetraps starting to sparkle, I went for the jugular, referring to that one crazy son of a bitch he shot. (See the link above). He smiled but then played coy, "Which one?" I put my hands near my crotch and made a mock grimace, mimicking the desperation of a man signing to the world that everything that he once held dear had been blown to bits. Sarge laughed and said, "You remember that?" The gleam in my eye said yes.

We had a great time then, as Walt recounted once again the old, old story of perhaps one of his greatest moments. He was very paranoid in Nam, extremely paranoid. But it was well justified, because so many of our guys were so stoned and just full of crap by nature that you had to be afraid. So he (he had an office) arranged a gun under his desk, bolted there or affixed somehow, to get the better of any crazy guy who might try to take him.

And then it happened. This one stoned son of a bitch was pissed off about something -- these are Sarge's words -- and he was making moves that he was going to come over the desk, just totally crazy stuff. At the last possible second, to defend himself, Sarge reached under the desk and blew the guy's crotch off. It was such a horrendous mess they're probably still trying to clean it up! Or piece the guy back together! It'd be hell to come off a high like that only to realize it was friendly fire that gave your wife grounds for divorce!

But it happened, and I have to say I'm actually quite glad it did ... because Walt is a hell of a handyman, and I would've never known him if that stoned son of a bitch would've had his way. Sure, Sarge had to face a deposition, but the blood tests on the guy were such that he was cleared. So everyone's happy.
Posted by dbkundalini at 12:27 PM