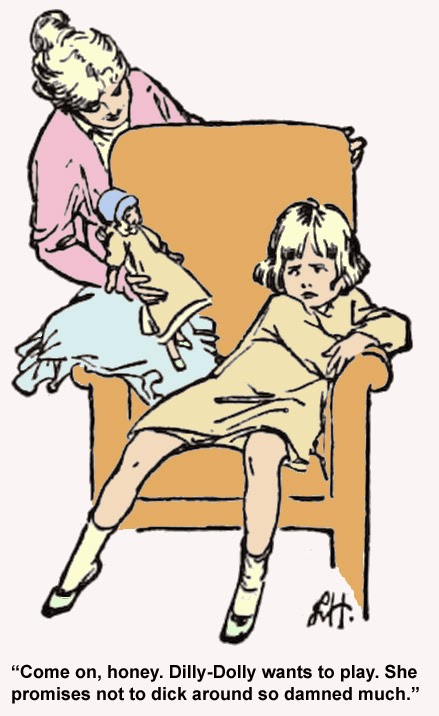 It's a sign of the times, dilly-dally dicking-around. I can't remember exactly when it started in a major way. I had a friend in the '70s who dilly-dally dicked-around somewhat; if he said he'd be there at 3:00 p.m., he'd certainly arrive by 4. But things have gotten so much worse now, probably having to do with people's busyness in general. We have so many labor-saving devices, computers, etc., but it means we take on so much more, then we compensate by dilly-dally dickin'-around.

In addition to people being behind on their schedule, I see a lot of dilly-dally dickin'-around at stoplights. You're in a line of traffic 15 cars long. The light changes green at the front, but the front guy's never ready. He's checking messages, writing an email, taking a nap -- who know what? The second guy's not much better. Then the third. So we have to get the third guy's attention, who gets the second guy's, then he's able to finally rouse the first guy. Now the light's red again. Too much dilly-dally dickin'-around!

OK, the whole concept's infected society -- it's everywhere! -- so it was just a matter of time before some big-time entrepreneur, with his finger on the slow pulse of a plodding society, would capitalize on it in various ways, one big way being for kids, with the Dilly-Dolly Dick-Around doll. A baby for the times! Dilly-Dolly Dick-Around perfectly embodies today's spirit, never quick to start and only arriving when she does.

You can raise her from her bed, put her down, raise her, put her down, and she does nothing. But set her in the corner for a couple minutes, and finally sweet Dilly-Dolly Dick-Around says, "Ma-ma, Ma-ma!" How joyous, she called out "Mama!" Better late than never.

Our Little Mommy has planned a fun tea party with Dilly-Dolly Dick-Around, lifting Dilly-Dolly's tiny cup to her little lips, pretending they're really doing something great together, being refreshed. A few minutes later you hear the sipping noise, she lets out a breath of satisfaction, and gladly announces, "That was a fun tea party!" The table's already cleared.

Too much tea, of course, means a coming bathroom trip. Dilly-Dolly Dick-Around is prepared for this one, fitted with a washable bladder and three little sets of undies. Little Mommy comes over, "You have to pee-pee?" Dilly-Dolly doesn't say anything and seems very content in silence. Until several minutes later when she announces, "Have to pee," when it's discovered she's already wet.

This teaches Little Mommy patience, and probably more to the point, Little Daddy, whoever he may be. We see him when he's around, which isn't very often. It was probably Little Daddy's errant ways that gave Dilly-Dolly Dick-Around her biggest personality defect, putting things off like this, and other signs of irresponsibility. Little Daddy dicked around too, not even acknowledging Dilly-Dolly the whole first year.

Little Mommy says, "Dilly-Dolly Dick-Around, you need to tell Mommy when you need to pee before it happens, so I can set you on the potty, OK?" Mommy's supported by Little Daddy, looking stern and just itching to take his belt off. But little Dilly-Dolly speaks not a word, simply staring blankly into the distance, a number of clouds taking their time to pass casually overhead.

Mommy and Daddy go in to watch something -- they're binge-watching parenting shows. From the quiet of Dilly-Dolly's crib comes her soft answer, barely audible over the baby monitor, "OK, I have to pee." That was a long time ago! You've already been wet and changed! Or is she referring to a brand new pee, something she'll do a half hour from now? Too much damned dilly-dally dickin'-around!

Time passes, and Dilly-Dolly's now pretend-grown-up. Little Mommy and Daddy try to kick her out of the house. She promises to leave voluntarily, "Just let me go to my room and pack a few things." But all this happened two years ago and she's still there.
Posted by dbkundalini at 3:53 PM