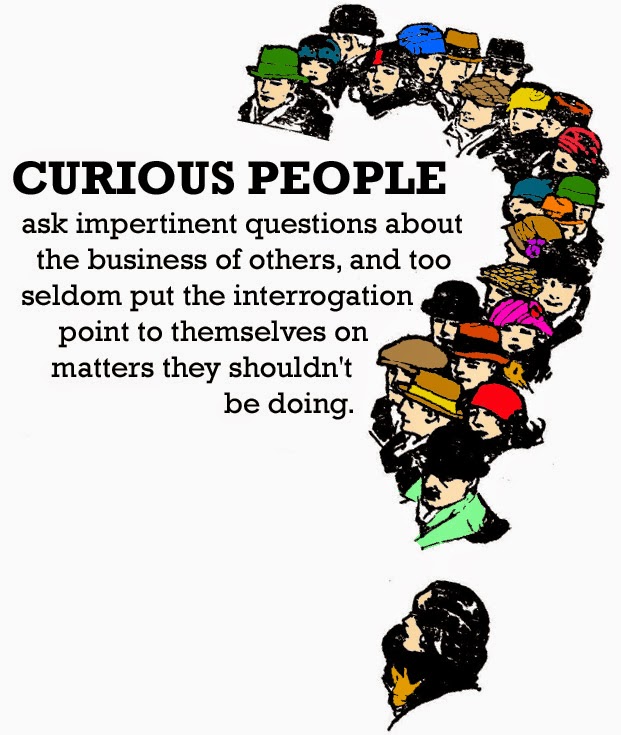 This isn't 100 years ago, back in the dark ages of history; this is now. So it's possible, and could be easily done, to know what's going on today. I always want to know what's going on. And if you're honest with yourself -- fat chance -- you do too! Because somewhere, someone's trying to get away with something. That much is established fact.

If you try to do it with older history -- stuff from a really long time ago -- you might get the rough outlines but that'd be it. And I venture to say you're not likely to get that much. Everyone's dead and there's no witnesses. Plus, add to that, the local landscape changes. A restroom in a local park from 100 years ago is no longer there, because the park isn't even there! Or they were doing this stuff upstairs at the saloon.

I sometimes wonder, if you could go back 100 years in time if people would just clam up. I've heard they had a greater sense of propriety than we do today, since we're a lot more open about lascivious things. I've personally heard people these days being very open -- painfully so -- about their love life, who did what to whom when. For embarrasment's sake, of course, it's tough listening, although it gives you a lot to reflect on later.

With this openness, you'd think you could just go up to someone and ask them what's going on. But I get the impression that even today people would clam up, especially if you were a complete stranger accosting them upon their exit. I'll give an example. I was at a picnic table one day and thought about going over to the facilities to go to the bathroom. Since I seriously don't want to be in there when someone else shows up -- park facilities are scary -- I spent an hour charting the comings and goings of people. I was able to establish that on average the facilities are visited about every 7 minutes. OK, in I went, and noticed a bunch of lascivious graffiti on the walls. I said to myself, "Somebody did this!" But which one, the guy from an hour ago? Was it one of the guys 7 minutes later, or 7 minutes after that, etc.? It wasn't me!

These places are obvious hotspots of a sort throughout the day, and, I'd guess, worse at night. Even though they technically close at 10:00 p.m., am I supposed to believe that an attendant shows up at precisely 10 o'clock every single night? I doubt it. That's a lot of weird history taking place nearly every minute of the day, 24 hours a day, on average every 7 minutes. I contend this stuff ought to be exposed to the light of day, documented and passed on to future generations. Who will have plenty of problems of their own.

I had the opportunity to investigate further today, but didn't take it. It was like this: I left the house and was way too early to pull into the church parking lot. So I went over to a different park, because there's some good shade there and I could stay cool while passing time. Naturally I didn't know when the 7 minutes started, but there was a truck pulled up next to the facilities. I thought, "Deja vu all over again." This phrase just popped in my head. Then like clockwork, here comes some guy out. That much is public record. But what he was doing -- the history of it -- is unknown. You could simply go up and say, "Excuse me, sir, what were you doing in there? Were you writing anything on the walls? Were you waiting for someone who didn't show up? Are you ashamed of yourself? Is that why you're refusing to answer? Sir, please, put your fists down! I'm sure we can resolve this amicably without nasty faces." Then I run across the lawn and step in about 12 episodes of dog droppings, another matter of park history that needs documentation.

Whatever he was doing, it was very possibly quite innocent. Or shameful and unforgivable.

Other things of of local history that one just aches to document would be: What goes on in old barns, knowing farm kids used to seeing animals breed, people walking briskly as though exercising (is that just cover after leaving someone's house?), and cat burglars in apartments, whether in broad daylight or under the cover of darkness. I'd love to bust a few of those guys. The key thing is I'm just looking for local history, as much as I can muster.
Posted by dbkundalini at 7:30 PM