Is Edison Spinning in His Grave? 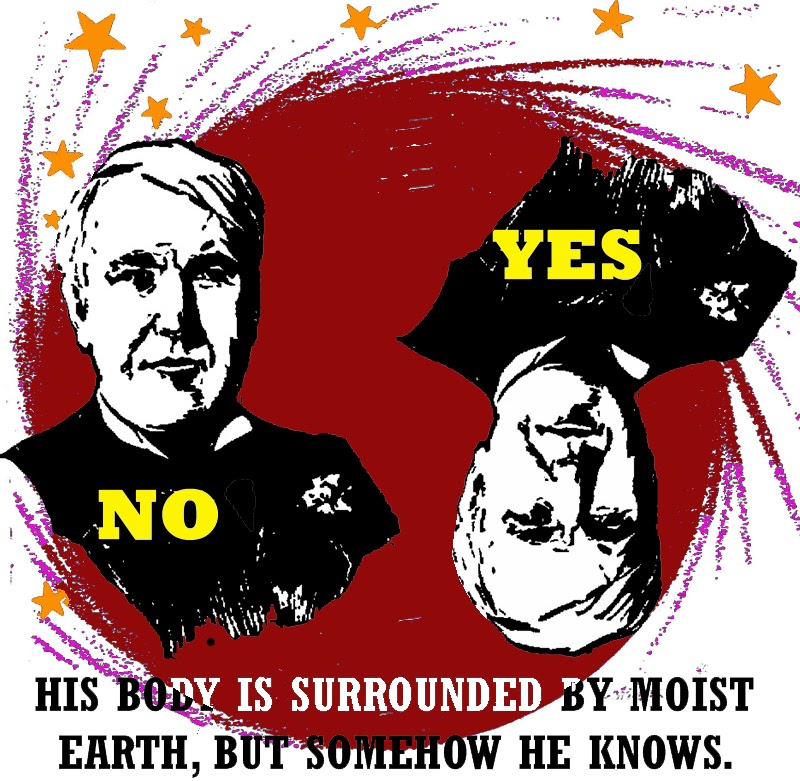 The debate rages on over modern curlycue light bulbs, which we hate, versus the good old time traditional light bulbs, which we all love. Through some unwelcome interference, the heavy hand of government, Thomas Alva Edison's good old light bulbs are going away, being taken off the market. We have had mixed emotions about this travesty, going from general everyday rage to exceedingly hot rage; the one constant is a bitter anger that shall never end.

Now, added to that, is a brand new debate, taking us to the grave site of the famous inventor and leaving us to wonder, Is Edison spinning in his grave? I personally believe he has to be, if his anger is anything like mine; the key takeaway from everything I know of him is that he was very invested in his inventions. And anytime anyone did anything remotely hostile to one of them -- I'm guessing here -- it sent him over the edge. He went ballistic. At the very least, he must be spinning over this!

But I'm nothing if not fair. So I will first present the NO response: He's not spinning.

NO! Edison was all about progress. He loved innovation. He knew as well as anyone -- thanks to his endless tinkering -- that inventions always will be improved on and adapted to the times. It just so happens that in these days the old ways are out, often for arbitrary reasons. But they frame it under the guise of "saving energy," so for that flimsy reason we have to change the light bulb. But Edison would have been fine with this, no doubt liking change for change sake, and innovation (so-called) merely for the sake of keeping busybodies occupied.

Edison liked making money, so he would've understood the real motivation here, the vast fortunes to be made by needlessly switching us to something different, however inferior the replacements might be. As for "saving energy," there's one light they can't tinker with -- the Sun -- the same old sun Edison often looked to for inspiration. Last time I checked -- which was in 2002 as a crew member on the spacecraft Solar Quest VII -- the great solar giant still had plenty of energy to give. No observable lack. So, NO, Edison is quite secure in his grave, no spinning.

YES! There was no one quite as vain as Edison. Children revered him. I know I did. We even had to memorize his middle name, which is more than we did for the average guy. It was a weird name we didn't know, that none of our friends had, ALVA. With that kind of adulation, Edison protected his reputation with ferocity.

Other inventors couldn't stand to be near him. He openly did all he could to sabotage them, mostly through legal means, tying them up for centuries in patent fights. Which he also invented, meaning he could never be similarly sued. Edison was inventive, yes, but even more so he was PREventive. His first aim was to hem in progress, to be its sole master.

The idea that Edison today could be doing anything else but spinning in his grave shall receive no credence from me. By now he's even worked up, with limited supplies, some kind of spit -- the Turn-o-Dead -- to make his spinning easier and faster. There's simply no way he could ever take this horrific change in the light bulb lying down. Even I'm up in arms over it; imagine how much more irate the inventor has to be.

So YES, YES, A THOUSAND YESES -- Edison is appalled, obviously spinning in his grave.
Posted by dbkundalini at 11:15 AM