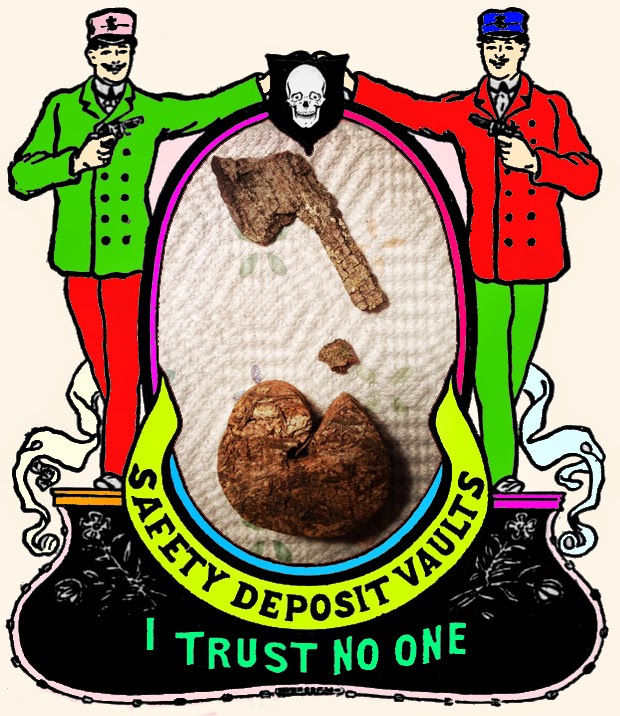 It's that time of year again, to check on the Wood Manhood relics. As trustee, according to the requirements set out in the agreement, I'm required to make sure they're all right. Along with the unusual (but agreeable) codicil that I "reflect thoughtfully on the meaning of the relics, leaving no stone unturned in the pursuit of meaningful thought and reflection." It further states, "Being truly reflective is key."

Obviously, with me that's hunky dory. I'm nothing but thoughtful reflection, and I already think often of the relics in the quiet of my meditations, always thankful, as anyone would be, that it wasn't me. I'm thankful, for one, that I'm still able to zip my own pants and tend to my own personal affairs without restrictions, family codicils, trustees, and safety deposit boxes. Don't get me wrong; if what you've got turns to wood and you're dead, I guess it's a good way to go. Better, say, than being forgotten entirely, even if the memories people have make them to flinch in shame, cross themselves, and run.

OK, I went to the bank where the relics are kept and proved my identity beyond all shadow of doubt. I trembled as I pulled forth the precious drawer. And there they were, just as you see in the above photo, against a background of semi-precious gold velvet. Amazing! Still perfectly preserved!

As you can readily see, the top relic is the manhood in question, belonging to Brother Unsettled, now wooden. The bottom relic was found near his remains, a yoni-shaped piece of wood that appears to have been his last comfort, whatever he may have done with it. And the center chip is all we have left -- the rest being misplaced or lost -- of many pieces of wood from the local forest.

Just to recap, in case you're new to this whole affair, Brother Unsettled and I dwelt in India with other chelas (students) of the master Sri Masturbananda. His teachings involve beholding glimpses of heaven and the Divine in 7-8 second increments, the male chela concentrating and acting until all is manifest. (Women chelas have some correlate experience, of which I know nothing.) For whatever reason, Brother Unsettled simply would not faithfully practice the meditations, leading to him to be a loner and something of an outcast in the ashram. In the end, in despair, his ending was unhappy, and he was found dead, having abused himself against fences, splintery boards and trees. And so, the transformed woodenness of his manhood.

To me, all this is a cautionary tale. I remember myself and the other chelas shaking our heads, going, "I don't want that to happen to me! What about you? No? Me neither!" And you want to know something, after all these years, it never did! I am blessed, and I hope you are too. But beware! Once you've taken the master's mantle, once you've found a place in his blessed fold, there's only one direction you must go [looking up.] The Divine is on your side, revealed today right where you are, as long as your devotions are sincere and good, in His grace. You might spit and sputter, that's OK. As long as you hope to become more like the master, perhaps even to the point of blowing the roof off an outhouse!

I will check in from time to time -- this is my continuing vow. Because it's in the terms of the agreement, certainly, but because I know how much I need to see these relics. They're not a crutch in any way. I already have the grace, as I'm sure you do as well. But I knew Unsettled. I saw what was possible for him, and I saw what he settled for. It wasn't anything good, unless you think a fence, a splintery board or tree is good for ... that kind of thing. I certainly do not!