I Laugh in the Face of Disease 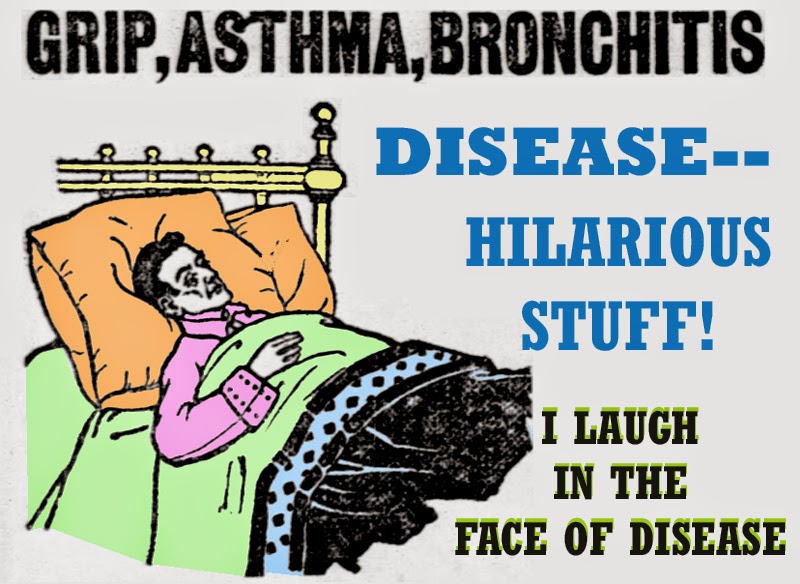 I'm big, I'm bad, where others cry, I laugh in the face of disease. Ha ha! (Like that.) Of course I feel, just like in the Declaration of Independence, that such a claim demands an explanation to justify it in the opinion of mankind, my fellow withering-away organisms.

Disease causes lots of heartbreak, am I right? In fact, it's major Heartbreak City. But these are the things I don't worry about. I look at it this way: Millions of people have gone before me, and they're all pleasantly a'moldering. All suffering is momentary, relief relatively swift. Plus, que sera sera.

Of course, the best thing is to avoid all suffering, if you can, which you can't, so just hit the high spots and avoid anything prolonged. And if you can't do that either, then let it roll over you like the other balms of life, relaxing and luxuriating in the fact that you were apparently chosen, perhaps bearing the sins of the world. If you have to dream, dream big!

We hear it so often that we should not laugh in the face of disease, that we should not sneer in the face of heartbreak. I've heard that all my life; it's been very hush hush. But really, that's not a rule we have to obey, since we're all going to go. What really is suffering, but the breakdown of finite forms? Eventually our finite forms are so broken down that they appear to disperse entirely. Grandma had a disease, to give an example, and it got her. She broke down to the point that she died, and I haven't seen her since. I assume there's still bones or something, but huggable she ain't.

Probably it will actually be harder for me, assuming I ever get a disease that threatens to take me, to laugh in its face. But I shall try. I'm only reluctant to say I will because, frankly, I don't presently laugh in the face of the smaller things that come my way. Like heartburn. I strive to overcome it. I do what I can, as most physical conscious entities would. And I try to stave off the inevitable heartbreak. But I believe that if I get something really bad I will find a way to laugh about it.

I'll give an example of something I don't suffer from. Bulimia. I don't have that, so it's easy to laugh it off. I have a little song* for it:

That's right, boys and girls, Imic will someday lose his trust. He's thinking today I'm a mighty bull, and indeed a mighty bull is he. But there will come a day... it could be he will wait it out and fall apart and turn to dust. But let it be written: He shall lose his trust! Going beyond that fate, it will more likely be that someone will eat him. Someone who still has his trust, namely, me.

Or Cancer. Cancer is something I very well might get. If I had to bet, I'd say I will. My parents both died from cancer. Obviously cancer's something to laugh in the face of. My earliest memories of cancer is in the old joke:

So far, cancer's not a problem I've had. I've been spared. Remember, I gave $50 to the anti-cancer society, so I'm hoping that gives me a certain immunity. I've had a lot of relatives die of cancer, those I've known and doubtless those I never knew. If anything major gets me, it'll likely be this disease. Yet I laugh in the face of cancer! I'm struttin' like a rooster, can't catch me, I'm the gingerbread man!

Join me in laughing in the face of disease. How can I do that? you ask. Start with a small smile, a tentative smile. Work your way up to a frightened chuckle, etc., then pretty soon you're bold faced, sneering, struttin', talkin' trash, philosophically dunking your way (basketball language) to rich and vibrant glory in the face of disease and suffering, your own and the disease others.
*Tune of Only a Boy Named David
Posted by dbkundalini at 2:33 PM