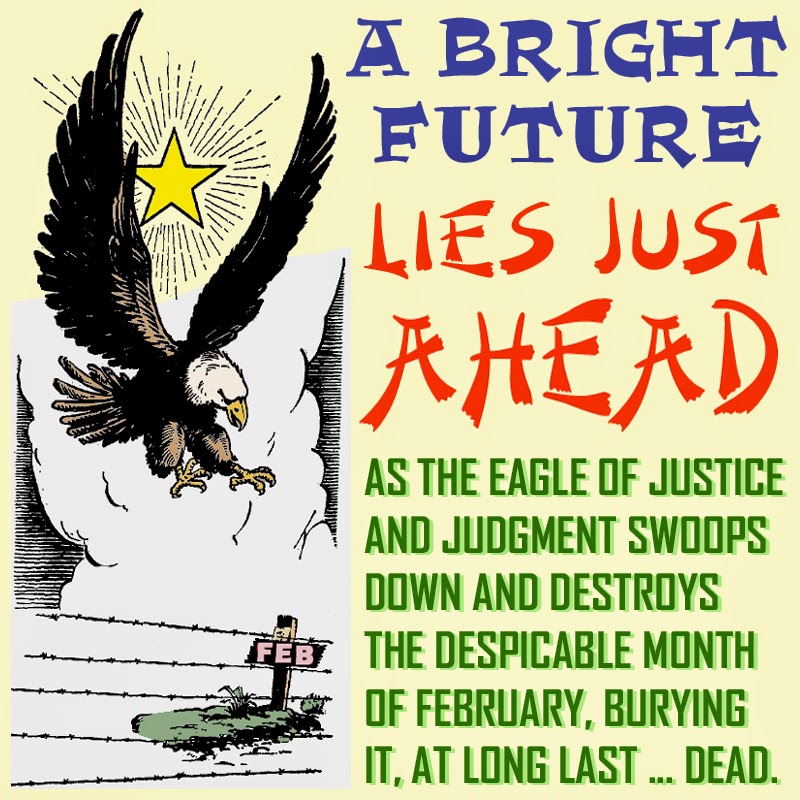 As January comes to an end, we're on the verge of something big having to do with February. The stubbiest month, hallelujah, at long last is going down! To defeat! Once and for all, forever, to be purged from our calendar. Dead and buried in an unmarked grave. Let us rejoice!

But wait! Having said all that, let me also say -- this is regrettable -- that even as I sense its destruction, I also sense an inexorable shadow over the proceedings. The vision's hard to pin down, but I see looming just ahead, in my consciousness, that our 28-day foe may still have few tricks up its sleeve. Will it be brought down so easily? Of course I hope it will, but I feel we must proceed cautiously.

There's definitely something being unleashed, OK? Even now as I write this, I see the light. And yet, the shadow also grows, impinging on the light of January. Of course we know in a few days January will go away for another year. But what follows it? That's what we're trying to influence. This year, yes, we know it has to be February. The calendars have all been printed, passed out by the banks. And the banks more or less run things. Screw with their calendars and they'll keep our money. Basically the shadow says this: "February has many friends, not just enemies."

I don't want to discourage anyone reading this, far from it! But this spot, this shadow is becoming bigger in my mind's eye. Could it be a tiny bit of sawdust, something in my eye, that always looks bigger up close? No, this is not a physical thing. This is like the shadow of evil itself! Telling me, and cackling about it even, that February thinks it shall have the final victory! I know what you think I should say: "Not over my dead body!" But I'll stand back, because I don't keel over so easily.

Because I'm not accepting thee vision, not now, not ever. Instead, I feel that we have the power of light on our side, which shall drive out every shadow. As in days of old -- eternity -- the darkness cannot comprehend the light! Am I right, high five! Woo woo! Would everyone here kindly step to the rear and let a winner lead the way! We've got this bastard, bastard! Feb-RU-ary! You gonna be ruin' the day you ever set foot in this world, for you shall see your ruin! Pack your bags, Joe, hit the road, Jack, and don't look back. (A little trash-talkin' always makes me feel better.)

And yet, the darkness grows, exasperating me to no end. I stomp my feet, it's there. I hold my breath, it continues to loom. I'm turning blue, about to pass out, but I feel I cannot give in. How can such a short month stand against my powerful will? I'm getting consternated. That could be it, the key to my victory. Will and anger, consternation! My tantrums have never been known to fail. Must remain defiant, with confidence and faith, and all will be well.

Still, just to be on the safe side, I'm nudging my declaration of just yesterday, that by Feb. 3 we shall glimpse success against February. Playing it safe, I'm now saying we shall surely glimpse success over it, much more likely, by Feb. 6. We're ceding only three days! And what's three days, when our suffering has gone on for ... so many dark years...

The swift demise of February is still assured!
Posted by dbkundalini at 1:03 PM