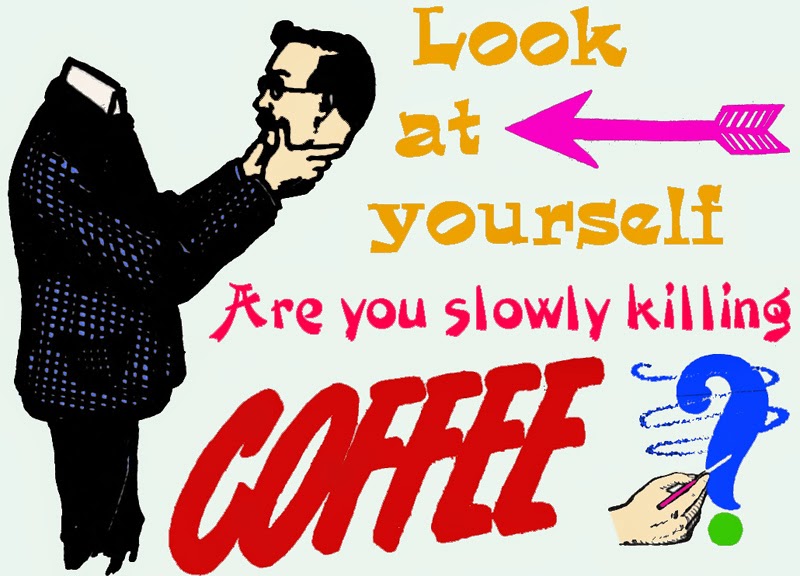 We're zeroing in today on the possible experiences of creatures other than humans and animals. Weird tales, huh? I saw it ages ago, somewhere, that seemingly inanimate pieces of metal have feelings. Which can be good news. Like with some of the old cars I used to own. They wouldn't start, causing me pain. But I'm glad they knew how I felt when I took a crowbar to their backside.

I've been thinking of this a lot, since I'm in the habit of getting up every morning and making coffee. Which involves a horrible grinding of the beans and pouring hot water on them. It's a devastating process. If coffee, like metal, is a living thing, wouldn't it have to be? It grew, matured and ripened. And now...

Coffee beans really were part of a living plant. Meant by nature to make the next generation of plants, not to be harvested for drinks. Whether they maintain life after being picked, I wouldn't swear to it, but I think it's likely. After being processed, most might be dead, but there's always the possibility that some were up against the side of the processing bin, missing the worst of it, and so are quite alive.

It's those few beans -- however many it'd be -- that I'm most concerned about. And take it from me, I'm a sensitive guy who loves coffee, so this is a real issue. Grinding it right out of the bag as I do could be the worst torture there is, the blades going a million miles an hour, ripping the soul out of the beans, who wonder with their last thought, "Is this what we were born for?" Then there's the metal blades, thinking, "Were we born to murder coffee?"

It was better off before I heard of any of this. You're always happier in ignorance. The best I can do, apart from giving up coffee, is this, to be quick with the hot water, hoping to mercifully drown whatever life might still be there, now mangled beyond recognition. I'm not cruel; a swift death is best.

However it's done, though, the whole thing has to be terrible, not just for their pain, but also for the confusion. We have our journey of life, and the thought of being picked, processed, bagged, then ground, and scalded to death is terrible to contemplate.

Coffee started out like us, with a life of fullness and promise, and had no idea what was to come. How joyous it would've been to suddenly bud out and realize, as a budding bean, that you're in the world! What will you be? A doctor, a nurse, a policeman, or even one who tends to plants similar to yourself? Moving and growing in the sun, part of life's harmony.

But life is also hard. Sometimes your choices aren't honored, sometimes your life is determined for you. You're treated like crap, you look up and wonder, "Aren't I as good a bean as any other? What's to become of me, my hopes?" etc., etc. These are the things we think...

Actual scientific studies on whether coffee feels pain are limited. Then even if we get them, I'm afraid I'll be cynical. In something as huge as coffee -- the economics of it -- I can only suspect the large conglomerates will have the scientists in their back pocket, with the research similarly hidden away, neat and tidy and unseen. In other words, the conglomerates will see to it that conclusive results never see the light of day. But until they take this site down, at least we have my rudimentary study, which, at least to my mind, tentatively shows the life of coffee is no cup of tea.
Posted by dbkundalini at 3:34 PM