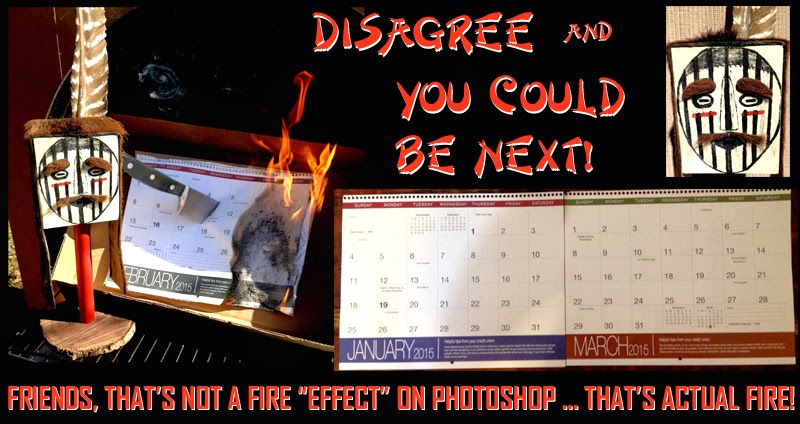 WORKING WITH A NATIVE GOD,
IN HIS POWER, WE RUN FEBRUARY
THROUGH WITH A BUTCHER KNIFE
AND CEREMONIALLY TURN IT OVER
TO THE FLAMES FOR JUDGMENT

I have been working in the deepest intuition through 2015, discerning things at their most basic level. It's frankly blown my mind, or, rather, expanded it, giving me once again that Super Brain feeling I've known numerous times in my life. As a kid I used to conduct a census on dust motes floating in my room -- learning much in the process -- before letting them collapse and vanish when I went down for breakfast.

That said, January has presented me with one enormous insight: That February is an aberration in time and time-keeping. The evidence against February flashed in rapid procession in my spirit. Like the dust motes of old, but a lot more apparently high tech, like 100,000 JPG thumbnails flashing by. This has to do with the honing and greater use of my mind over the years, along with incidental aspects that may have come from movies or TV. (If I have been bionically enhanced, I don't consciously remember it.)

Be that as it may, I don't feel I need to justify this too much. After all, we're only talking about stinking February. The worst month on the calendar, a short little hobbled period of time, maybe not even technically a month, a la Pluto not really being a planet. January's a month, March is a month, February's a rest stop in the middle! And not even one with major facilities, but one like truck drivers use to blow carbon out of their rigs, perhaps catching a bit of shuteye, and whatever other quickie XXX activity they may be into.

My great revulsion against February is fairly recent. But I do seem to remember being at least slightly queasy about February all my life. What other month do we feel so sorry for that we add a day every few years? There's none, just this stubby little passel of days. And if they weren't actual days of time, but existed simply on a pretend calendar, I'm sure we wouldn't be so merciful. We'd take it, rip it out, and burn it.

You know what? I feel led right now -- this is true, from on high -- to symbolically, ritually, cleanse ourselves of February. Which doesn't mean we won't have February this year, but it might be more tolerable. That's what a lot of ritual is for, to make life easier; you feel badly for your sins, so you sacrifice a lamb. You call in sick from work, then to compensate for it you actually get sick.

You're invited to join me in this sacrifice. As I type this, I'm also cutting the little month of February off my checkbook calendar. (The ceremony is illustrated above.) Now I'm holding it up. Notice how small and harmless it is, physically as well as small compared to the other months. OK, the rest of the ritual will be in two steps. 1) I'm holding it up and lighting the bottom corner with a match. Now as the flames rise higher, I'm rotating it and trying not to get burnt. Repeat after me: "I burn you to ashes. You shall never again arise." 2) I'm putting a little piece of PostIt® note in the hole and drawing an arrow from January to March.

Wow, that feels good. Except I've got this cursed little bit of ash leftover, which could simply go in the trash or be cast to the wind. But I will carry the ritual through to the end, by putting it in the garbage disposal, with these words of power: "How dare you, unspeakable so-called month, pollute my life? Now I am cleansed of you. Now I am free."

I'm giving my readers a special thanks today for standing with me. To be in agreement as we are is very valuable for the cleansing. We now have the power to carry on, at least for this day. Let us resolve, if not this year then next, to go directly from January to March!

Post-It® Brand is a trademark of 3M.
Posted by dbkundalini at 1:31 PM