The Time Machine Got Me a Domme 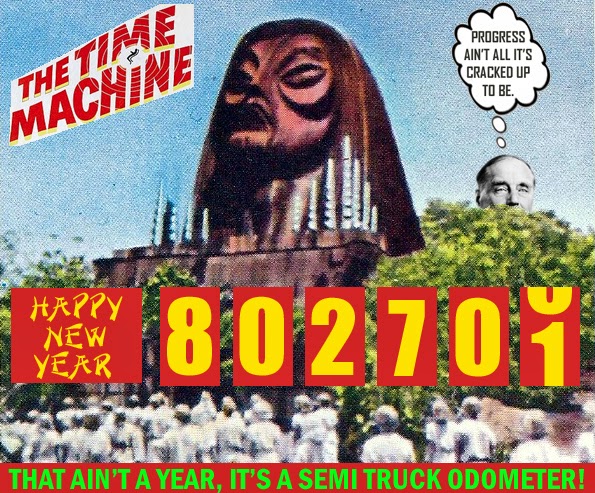 Earlier this month I watched the 1960 movie "The Time Machine," based on H.G. Wells' novel. Maybe you remember it. The guy goes far into the future, all the way to the year 802701, farther than anyone's ever gone before, to my knowledge.

Well, it just so happens that the H.G. Wells Museum is only 35 miles from me, the pride of Silage City. And to add one more incredible coincidence, they've had his actual time machine on display the last couple of months. To get right to the point, I messed with it, accidentally taking it back before the museum was built. But Grandma's house has been around forever, so I hauled it home. Then when I realized no one would be looking for it, I started carting it around in the back of my pickup. And had no good reason to use it ... until the other night.

My current lady was a meek and mild gal, delighted with any little thing I might do for her. I asked where she wanted to go for her birthday. At first she said I should just save my money and not bother, but I'm saying, "No, I want to treat you right, kitten. C'mon, let's go, you're worth it." So I took her to the nicest place in town, steak, potato, salad, endless bread, the works, and desserts to die for.

After we ate, I suggested one of the desserts. In her meekness, she was very reticent, until I convinced her it'd be OK. "It's only money." "OK, darling," she said, "If you think it's best." So meek. The guy brings us the most delicious looking apple caramel cake sticky ice cream mountain plate thing and two spoons. I can see this will be bad for me, because now I wanted it all for myself and not to share it.

So I excused myself and ran out to the time machine. I had a plan. I would go back to the time and place of her birth, across town, thinking that if I could just delay her birth 10 minutes, it'd give me time to get back and eat the dessert. Then 10 minutes later, likely, she'd appear across from me. So that's exactly what I did. I'm at the hospital, 1953, and pulled the fire alarm. It put her parents in a panic and her mom's contractions completely stopped.

I get back to the present and my lady's not there, just the dessert, which I'm able to eat in peace. Success! But then I'm waiting, waiting, waiting, and she never shows up. I'm thinking, Crap, maybe there was a problem with her not being born. At this rate I'm not even going to have a lady! And I'd hate to walk out of here alone, always a bad look for a guy. OK for losers, not me.

So what other choice did I have but to fix things? I told a waitress I'm going to the can. Then out I went again, through the restroom window.

I get back to 1953, this time two minutes before I would arrive the first time. I hid around the corner, saw myself going toward the alarm and killed "me." I looked down at my body and dragged it away. Always one of my greatest fears, to be dumped in a janitor's closet. But there was no time for anything better. Now I'm heading down the hall to the birth chambers, when what do I see but the waiting room is actually on fire. I pull the fire alarm again and hurry down to counsel anyone having fits.

Before I could get into the delivery room I heard her mother doing some extremely loud pushing, out of her confidence, then the cry of my future lady, a very bold cry for a baby, like something from Wagner. One of those big gals with the winged helmets. A real take-charge sound!

I rushed back to the present as fast as I could, and found my lady already at the table. Not only that, but her whole new life had been one of boldness, daring, and confidence -- all these years -- meaning that in this present continuum she's always the boss. She demanded to know where I'd been. I said the restroom and she called me a wimp. "You can't hold it 10 minutes?" I sat down and saw that she had not only eaten the entire dessert, but heard her setting down a new rule, that since I am hopelessly out of shape and a constant disappointment, I must never eat any dessert without her permission.

And that's the way it's been the last few days. She went from Zero to Hero. I now have to ask her permission to do anything, get up, take a nap, go for coffee, spend a nickel, etc. All of it's kind of kinky, if you know what I mean, but the micromanaging has a huge downside too. I mean, so what if I want an occasional beer with a friend? I can't get the permission! A friend calls and I'm like, "Brunhilde says no, and for you to never call again." I'm her slave!

All because of H.G. Wells and his stinking time machine, which I also had to ask her permission to destroy. So embarrassing crawling in. "Mistress, I know this is an odd request." I looked up at her, just narrowly not breaking the rule against eye contact, and saw her look of imperial impatience and disdain. "But I have a time machine I have to destroy. May I use the crowbar, just this once, Ma'am?" She kicked my ass and sent me on my way, which I took as a reluctant "Yes."

Before I destroyed it, the temptation occurred to me, I could still fix this.
Posted by dbkundalini at 1:14 PM