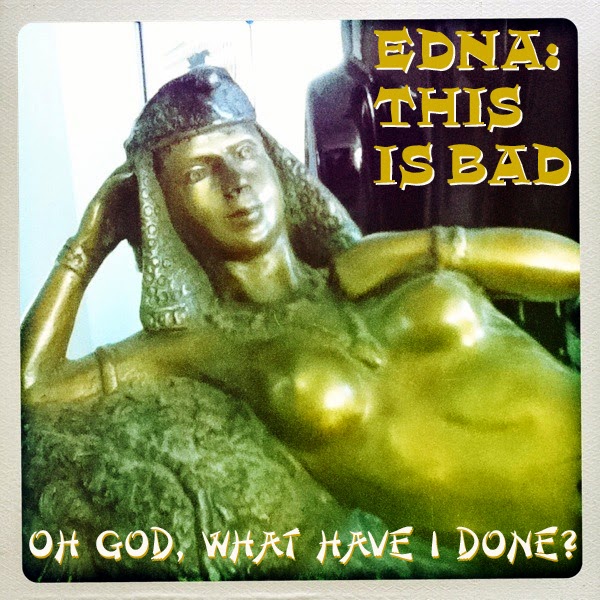 The last month or so I've been re-reading some of my favorite psychoanalytical texts, which naturally include C.G. Jung's Psychology and Alchemy, one of my go-to books for years. And something weird happened to me, much weirder than usual.

You probably recall what alchemy is all about. The changing by chemical processes of other forms of matter into gold, tough to do. But Jung argued that the alchemists -- the good ones -- had other more profound motives, coming up with psychological gold, the coming to the fullness of the Self. It was the gold standard of self-help exercises.

Unfortunately, when I start messing with stuff like this, things happen. I hate to mention a few years ago when I was messing with sacred scriptures, a la Nebuchadnezzar, I went crazy and was literally a wild animal in the fields. Yeah. Well, this time someone forgot to warn me about the spirits of gold, so I've had a problem with turning things into gold. Anything at home I've touched, including all the TV remotes. Solid gold. I took a few of them to the jewelry store and now I can't change the channel. The TV's stuck on Jerry Springer's channel and I'm about sick of ads for The General Insurance.

The problem all started when I was concentrating very hard on my reading, reading with one eye shut. My theory is I was overloading one side of the brain, which Jung never thought of. To make matters worse, since I've been doing this for a few years, I was wearing my reading glasses, which only has one lens. It really magnifies things, overloading the brain that much faster.

And now, trying to deal with turning things into gold -- the Midas touch -- is tougher than you'd think. I wanted to go to the country and think it over, but I couldn't drive my car. And so forth. I can't have a gold car sitting in the driveway. They'll put me back in the home for crazy nuisances.

As I continued to mess with this stuff, then, I made some progress in controlling it. I discovered I could turn it off by saying "Midas touch no," and turn it on again with "Midas touch yes." It worked hit and miss the first few times, but with persistence, I got it so it was extremely reliable.

OK, this leads to the conundrum I'm in now. Having the Midas touch did wonders for my confidence. You can imagine. My confidence before was crap; now, so to speak, it's gold. I was operating with the gold standard of confidence. It seemed like there was nothing I couldn't do.

So guess what... Without having an account at Match.com or any other dating site, I met a woman, Edna, and came on to her with the utmost confidence, the way they like it. Smooth as silk, right there in the supermarket, "Hey baby," and my confident pitch, my chatter, my romantic spiel, my love patter, was such that it won the day ... and the lady. We started seeing each other. I had my ordinary hardtop car cut down to a convertible, and the little bits of hair I have on the sides of my head were flapping in the breeze. We talked of going to Mexico and sitting on the beach, writing our names in the sand, then standing back and daring the waves to efface them. (In Mexico you get up when you want, eat when you want; everything you do you do when you want. Why people escape to the U.S. is beyond me.)

The subject of gold came up, as in friendship rings, and I'd had the Midas touch set on NO for quite a while, allowing me to freely handle her, to the extent she would let me. I try to be subtle, you know, never having been a real wolf, a bear when it comes to the hands, and certainly I was brought up not to be boorish with women. My mom drilled that in my head, always pointing to Dad as the kind of gentleman I should be. And Dad did pretty damned good, out of all the women in the world getting my mother.

OK, she's so impressed by my power that now she's all hands, a fox, a wolf, boorish. But I'm leaning back, my eyes are rolled back so far in my head I can see the stars behind me. Naturally at this point I'm oblivious to any and all consequences. Given my excitement, of course I lunged ahead and was all over her, when-- Great God in Heaven! Infernal Spirits of a Christless Hell! What have I done? I looked down, aghast, and Edna was solid gold!

I raised my hands, looking at those two instruments of destruction with the impulse of searing hatred in my eyes. "You flaky sons of bitches!" I cried in anger. "No, wait, I have to get a grip. First things first, 'Midas touch no,'" turning it off.

But what was done was done... I didn't have a way to reverse the process. I didn't know what to do. Basically this is what's happened: I went from the sweetest, dirtiest girlfriend I've ever had to the biggest, nudest paperweight in the world. Fully nude except for an Egyptian tiara, worth her weight in gold, certainly, but at the same time worthless. You can't sell the transformed corpse of your girlfriend. They say.

And it's these flaky sons-of-bitchin' hands that did this! And my big mouth.
Posted by dbkundalini at 9:45 AM