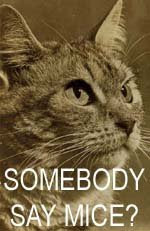 I'm in kind of a wistful, sentimental mood. As you know, I had an on/off relationship with Grandpa Slump. He died in '78, so really whatever sourness there was is pretty much sweetened up a bit, and sentimentality is pretty common. My memories are much more streamlined, pressed in a mold, shaped and reshaped after all this time. I remember some things with gladness and sorrow both, like all the F bombs he used to drop when he was with us guys. It was good that he thought me mature enough and man enough to listen to him cuss a blue streak. But there's a little sorrow because I remember him as being overly angry.

I was walking around out in the driveway a while ago and looking out at the road there, now paved but it was a gravel road when Grandpa was here. That's the road -- the very road -- where he used to fling dead mice. We would get up in the morning and check the traps, and if we'd caught a mouse, it was fun to see him take it out, take it by the tail, open the door, step out, and fling it out in the road. It's not that far, but still, it would have to put a strain on the internal integrity and construction dynamics of that thin little tail, with all the mouse's body weight at one end and Grandpa's force at the other, combined, as it was flung. Yet I never saw one snap off.

I used to think of the mice out in the road, all day long being run over by cars, trucks, and tractors. Finally they would have to be ground down to nothing, just a oneness with the gravel and dirt. Or maybe a snake or bird would come along and carry them away. Who knows? One thing is for sure, they wouldn't be there forever. In fact it was very rare to go out there and find a dead mouse in the road at all. Right afterwards, sure, but hours later, not so much.

Sometimes I think about things I used to own, tricycles, cameras, other junk, stuff that's been sold or tossed out. And I wonder if it all still exists somewhere, not as the actual thing being used, usually, but maybe as a piece of metal twisted and buried 10 feet in the dirt somewhere. That's possible. Some of this stuff is never really gotten rid of. Could it be possible though, that, say, a tricycle I had 50 years ago, could still be a twisted piece of metal somewhere underground, somewhere still in this world? The red paint flaking or maybe all gone. It's an awesome thought piece, isn't it?