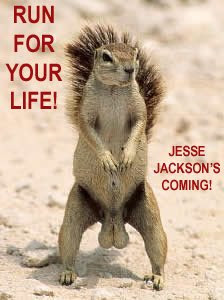 I still have all of my old scruples about serious cussing around womenfolk. This is something I got in part from Grandpa. He was big with some of the milder cussing but always saved the F bombs -- real vulgar stuff -- for when he was around us guys only. I remember he'd take me to school and he'd be F bombing all over the place, and I definitely knew I was a guy.

But I actually have a lot more scruples than Grandpa ever had when it comes to this stuff. I think he was a wild man wherever he was raised (southern Missouri) and did his best to come around to civilization. But I was civilized from the start, a proper gentleman in many ways. (I had a mother who kept tabs on me.) I could still fit in with Grandpa, if you know what I mean, but boys were definitely softer in my day than in Grandpa's.

So, this brings us up to today. And yesterday. When they were reporting all that business about Jesse Jackson wanting to cut off Obama's [clearing my throat], I heard it once, then cleared my throat all the other times it was mentioned. I don't need Grandma hearing that kind of dirty talk. So she's going, "What'd they say?" I'm kind of patting my chest, like, 'I don't know what brought on that throat clearing fit. Something down the wrong tube.' "I'm sorry, Grandma, I didn't hear it." Fortunately she was able to let it go.

And there I am, hoping for better news, anything else, an earthquake in China, a typhoon in an orphanage, anything to keep me from being embarrassed.

Plus, think about it: Grandma is so old that her mind runs in deep ruts. She might hear what Jesse Jackson actually said and go around repeating it. And sometimes she can talk really loudly. "HE SAID HE WANTS TO CUT OFF HIS [clearing my throat]." Then I'd be clearing my throat like that when Grandma's talking to her friends, or in the grocery store, or sitting in church. Patting my chest, never knowing what came over me.

The only thing to do -- well, there's two things, 1) Go without the news, except Grandma is addicted to getting the news; 2) Keep clearing my throat everytime it's reported or, or right at that moment click it off and say, "Well, sounds like we're into reruns."

If you know as much about old people as I do, you know they hate reruns. I knew a guy whose Dad was a very depressed old man. And this guy wanted to cheer him up, so he suggested getting him a VCR. "Ahh, what do I need one of those for?" So the son said he would get him a lot of John Wayne movies. But the Dad only complained in his lowest depressed voice, "They'd probably just be reruns."

Now that Jesse Jackson has apologized for threatening -- you know -- they'll probably quit mentioning it so often. I hope! But till they do, the throat clearing is a clever enough ruse. And I really don't think she's catching on.
Posted by dbkundalini at 7:27 PM