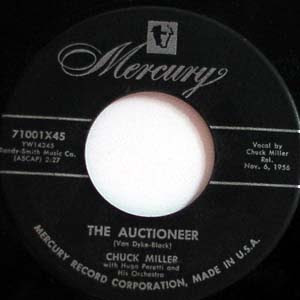 There is a song I have on my mind almost constantly. I will tweak the word "constantly," because I'm excluding any time I have to be in conversations, emergency situations, etc. This song is on my mind often enough to say it's constantly there.

It's the song "Auctioneer." It was most famous as recorded by Leroy Van Dyke (co-writer). That's the one I've always known. I think he recorded it a couple times, once the original, then a remake that was on a "Greatest Hits" collection on another label. But I have another 45 of it, by a guy named Chuck Miller. Chuck's version is on Mercury Records, 71001X45. I haven't heard Leroy's version lately, but I believe it's the one I'm singing most often.

Chuck's version seems pretty fast, and he does an oddball up and down thing with singing the lyrics, that makes it sound looser, less true to the tune. His auctioneer voice is very good. I think when I'm singing it I'm not quite that fast. I don't have Leroy's on MP3, just Chuck's. But somewhere in my records -- unorganized -- there's either one or both of Leroy's versions.

I love the part that starts off like this, "Hey, all right sir, open the gate and let 'em out, and here we got, and what are you gonna give for 'em?"

The song, in case you're unfamiliar with it, tells the story of a boy from Arkansas, who didn't listen to his Ma, when she told him that he should go to school. Instead he wanted to be an auctioneer, so he sneaked around, listened to the auctioneers and practiced calling bids both night and day. His pap would find him behind the barn, just a working up an awful storm. (I'm paraphrasing lyrics there in case you didn't notice.) Anyway, he gets really good, and people are coming from miles around "just to hear him make that rhythmic sound that fills their hearts with such a happy cheer." He gets more famous and has to buy a plane to get around, finally becoming the greatest hillbilly auctioneer.

Great song, but a real burden when you can't get it out of your head.
Posted by dbkundalini at 7:29 PM