I was looking at something on a microfilmed newspaper online today, more or less at random. I went from one page to another. Then I noticed this little tragedy, page 4, The Waterloo Daily Courier, Waterloo, Iowa, June 1, 1895.

I was a little sorry I saw it because I knew I'd be wasting some more time to try to discover how it turned out. Surely, I thought, the trial went on for years, so I was searching for 10 years after that. It sounds, like this article says, a little suspicious, since someone said they'd been quarreling bitterly of late.
That's one of the reasons I don't want to keep a loaded gun by my bed. The weird dreams I have, I could wake up at any minute and kill everyone I know. Then what do I say? I didn't know what I was doing? I thought it was a burglar?
That's a tragic story, the story of Mr. Lewis Hall. I couldn't find anything on the web about him other than the newspaper story. The short story: He's in Marshalltown, Iowa, he kills someone, and that's it.
Later in the day, I took up the search again, and managed to find one more article: 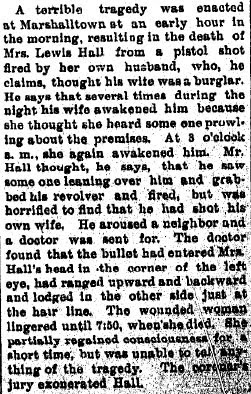 This is pretty close in time to the other article. June 6, 1895, p. 6, The Jewell Record, Jewell, Iowa.
So within a week it looks like it was resolved. It doesn't say how it happened, but somehow the coroner's jury exonerated Mr. Hall.
So apparently there's no mystery to it. That's it. He was able to go on from that point, his record clear, I assume, and eventually died himself.
What a terrible feeling it must have been, though, to know that that happened. That you accidentally killed your wife one night, thinking she was a burglar. What do you tell the women you meet in the future? "I'm a widower." "Oh, what happened?" "I'd rather you didn't ask."
Posted by dbkundalini at 6:18 PM