Men Everywhere Stand Against The Industrialists 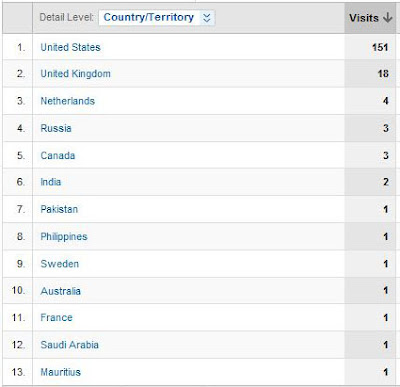 It does my poor heart good to check out my traffic at this blog once in a while. Because it's great to see, despite the appearances here on the half acre, with it being just me and Grandma, that I actually don't stand alone.

Somehow my internet signal is being beamed out to the entire world, at least to a selective few out there who have just the right aerials and other receiving devices. The statistics seen above prove it, that one here and one there, and a few in other places are getting their news right from the horse's mouth, here on the Grandma Slump blog.

The chart shows my worldwide outreach from April 7 through May 7, 2010, this year. And that's the last month, during which I have been doing a lot of teaching -- nothing but -- on the industrial powers and the industrial sections of our towns. All these people have been getting the straight scoop on what's going on, and, like I said, that does my poor heart good!

I'm greatly encouraged, because, going by the "birds of a feather" rule, it is my assumption that all of these men from around the world agree with me. Yes, I know a few of the hits had to come from the industrialist enemies, many of whom were monitoring my blog locally, who then staked out positions in my yard and trees and oppressed me for the last couple of weeks. That is, they were oppressing me until Paul Krugman shamed them the other day. With that shaming, the chiefs and underlings all abandoned their stations in my pussy willow trees, and I haven't seen them since.

Of course the hits from the enemies had to come by and large from the United States, since that's where I'm currently stationed. Our house has been in the United States ever since I can remember, from before the time I was born. I'm very sure it's indigenous to these parts, with the foundation apparently made of bricks made with American clay. There's definitely no other records that I know of, and with Grandpa's death in the late '70s, some of the history will never be fully told. Certainly, whatever the other facts are, the chiefs and underlings were here in America.

Look again at that list. It's impressive! 18 from the United Kingdom! I mention it especially because that's where the Industrial Revolution was discovered. A bunch of industrial revolutionaries got together and caused a violent overthrow of the previous system of tinkerers, cobblers, and craftsmen. I believe it was the tinkerers who became depressed and killed themselves. And if memory serves, the cobblers were the ones who fell into a vat of something and were liquefied. A few craftsmen remained to tell the tale.

So think of how important my outreach is to the men of the United Kingdom. They're on the front lines of this despicable history, so of course they're hungry for information. Along with the other stuff they eat, mostly fish and chips.

The Netherlands is represented on the list by four men. That's a good start and very heartening, because I've always had a great respect for that country, if it's the one I'm thinking of, with the finger in the dike and all that.

Then there's Russia, who used to get their false information from Pravda, but now fortunately are able to peek under the Iron Curtain and tap into the truth I present. I've got three hits from Russia.

Canada has three. India two. I believe I heard this was the big year for the Kumbha Mela, so I'm happy that two men (or one man twice) took time out from the ritual bathing and guru-following long enough to read my posts.

There was one man from Pakistan, and I sincerely hope it wasn't the New York terrorist or any of his henchmen. There's got to be normal men in Pakistan, too, right?

The Philippines is represented by one man. So with 3000 islands making up that nation, I need quite a few more to get one from each island. That'd be wild, wouldn't it? To live in a country that's 3000 islands! I'd guess 5th grade geography would be tough, having to memorize that many places.

The Swedes, the Aussies, and the French have been here one, one, and one times, respectively. To whom I'd love to say "Hi" in their native languages.

The last ones on the list include one man from Saudi Arabia. Maybe a very rich oil sheik. The Saudis have the right idea about where to get oil, under the sand. It's certainly a lot cleaner than getting it from the Gulf of Mexico.

The very last one on the list is Mauritius. This one I'm going to have to look up. Cool, Wikipedia says it's an island nation off the coast of Africa in the southwest Indian Ocean, about 560 miles east of Madagascar. I guess that's cool. It sounds very far away, but it's still cool, especially because at one time this was where the dodo bird lived, last in the 1600s.

It's a good thing it went extinct back then, because the industrialists would've definitely killed them off anyway in more recent times if they'd had half a chance! The fact that I have a man from Mauritius reading my blog gives me the hope we might find some dodo DNA and be able to reconstitute one in a laboratory, if we can make an egg, find a male dodo to fertilize it, then determine the exact incubation time needed to hatch it.

The world and all its men are rising up against the industrial powers, with me leading the way! Thank you for standing with me in this important work!
Posted by dbkundalini at 4:48 PM